So, you think you can clap to the beat? 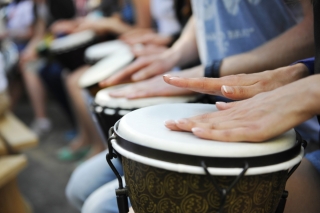 Researchers at McGill University and the University of Montreal, have discovered that beat-deafness, though very rare, is a problem not simply of how people feel a pulse or move their bodies, but instead, how people synchronize with sounds they hear.

“We examined beat tracking, the ability to find a regular pulse and move with it, in individuals who complained of difficulty following a beat in everyday activities like listening to music and dancing,” says McGill psychology professor Caroline Palmer.

Deficits in synchronizing help to uncover fundamental properties of human neural function, such as how auditory and motor systems are integrated in neural networks.

Because beat deafness is so rare, the researchers compared two beat deaf individuals with 32 control participants of comparable age and educational level. Listeners were asked to tap evenly in the absence of any sound. The researchers found that all participants performed this task well, ruling out a general motor deficit.

“We found that these beat-deaf individuals were able to perceive different rhythms and tap a regular beat in the absence of sound, similarly to control group members,” says Palmer. “Only when they had to move with the beat did we see a deficit, compared with the control group.”

No sense of rhythm
“Most people had no problem, but the beat-deaf individuals were quite variable in their tapping - sometimes missing the beat by a large amount,” says Palmer, who is also Director of the NSERC-CREATE training network in Auditory Cognitive Neuroscience.  “The most difficult test was to tap along with a metronome that suddenly became faster or slower. The non-beat-deaf were able to adapt to the changes within a few beats, but interestingly, the beat-deaf individuals were not able to synchronize with the new beat. The types of mistakes that beat-deaf individuals made indicated deficits in biological rhythms, including the natural frequencies or rates at which the internal oscillations pulsed, and how long it took them to respond to the new metronome tempo.”

Biological rhythms are behaviors that are periodic or cyclic, and can be slow like circadian day/night cycles or fast like heart rates. Common activities like walking, clapping, making music, and even speaking are all examples of rhythms. Some rhythmic behaviors are driven by external cues, like a musical tempo that makes a jogger run faster, or a fast walker who slows down to match their partner's pace.

“While most people can adapt their rhythms in response to an external cue, some people are less able to do that”, says Palmer. “We tested what makes beat-deaf individuals different, by seeing how people whose biological rhythms may not respond normally to external cues adapt to an external beat”.

Rare condition
Utilizing computational models to build on their previous work on beat-deafness, the researchers compared how well an internal rhythm, modeled with a periodic (cyclic) oscillator, changes its pulse in response to an external cue from the metronome.  This approach enables researchers to determine not only how beat-deaf individuals differ from normal controls, but also how one beat-deaf individual may differ from another. It also enables researchers to build better scientific models of what it means for someone to synchronize their behavior with someone else.

“Our findings support the idea that beat-deafness is a problem of how our internal biological rhythms adapt to or couple with changing sounds in the environment that, in most individuals, make it possible to dance, ice skate with a partner, and bob one's head to the beat of a favorite tune”.


This research was supported by NSERC, Canada Research Chairs program, and Belgian FRS-FRNS.

Losing the beat: Deficits in temporal coordination by Caroline Palmer, Pascale Lidji, and Isabelle Peretz will be published in the journal Philosophical Transactions: Biological Sciences on November 10, 2014.

BRAMS (International Laboratory for Brain, Music and Sound Research, in Montréal) is looking for people who have difficulties dancing or moving in time with a beat. If you cannot synchronize simple body movements to music or to a beat and would like to participate in our studies, please send us an e-mail at beat.brams [at] gmail.com