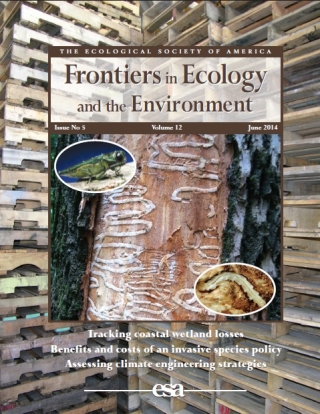 The emerald ash borer (Agrilus plantipenis), a recent insect immigrant to North America carried in with the wooden packing material of imported goods, is projected to cause over a billion dollars in damages annually over the next decade. International standards now require expensive fumigation or heat treatment of wood pallets and crates to prevent the inadvertent import of new wood boring insect pests in shipping materials.

Preventative treatment is worthwhile when the cumulative damages of widening infestations are considered, report scientists in Ecological Society of America’s journal Frontiers in Ecology and the Environment. Their cover story in the June 2014 issue, published online ahead of print this week, is the first pathway-level risk assessment of the net benefits of current international phytosanitary policy.

The emerald ash borer is already established throughout much of Michigan and areas of Illinois Indiana, Ohio, Pennsylvania, and Ontario, Canada. Some critics have argued that investments in pest management are not justified because prevention can only delay invasions, and, unlike the emerald ash borer, many introduced species do not cause substantial damages. But there is an economic net benefit to preventing or delaying the introduction of the emerald ash borer to parts of the US that do not yet harbor it.

“Even when these factors are considered and incorporated along with the best available scientific data into our models, there is an expected economic net benefit to preventing or delaying the introduction of new pests, a few of which may be as bad or worse than the emerald ash borer,” said lead author Brian Leung, an ecologist at McGill University in Montreal, Canada. “Treatment reduces the risk of low probability, but highly damaging, events, much like an insurance policy, or mitigation of natural disasters.”

Global trade unintentionally moves living species around the world in packing materials, ballast water, and on live nursery plants. Most of these accidental immigrants are harmless, but a small number that prove problematic can have outsized costs. The emerald ash borer, a native of Southeast Asia and Eastern Russia, lacks predators in North America and has spread quickly, killing millions of ash trees since its discovery near Detroit, Mich.

Emerald ash borer larvae feed on the cells of the tree’s nutrient and water transport systems. Eventually, water and nutrients no longer flow to the tips of the branches, and the tree dies.

For their risk analysis, Leung and colleagues drew on a study of the “Effectiveness of the International Phytosanitary Standard ISPM No. 15 on reducing wood borer infestation rates in wood packaging material entering the United States,” published last week in the journal PLoS ONE by coauthor Robert Haack (press release), that found that implementation of ISPM15 treatment standards reduced wood borer infestation rates by up to 52%.

“Here we’re just talking about economic costs. These analyses have not incorporated the non-market, or ecological, values of the trees, so the benefits are even greater than our calculations,” said Leung.

Although preventative treatment is not 100% effective and the up-font cost is high, Leung and colleagues estimate that the economic benefits of slowing the introduction of wood boring insect pests will accumulate a net benefit of $11.7 billion, taking into account benefits minus costs through 2050. They project annual benefits to exceed costs by 2016, and cumulative net benefits to be in the black by 2024.

ISPM15, implemented in the United States beginning in 2005-6, requires that all wood packaging materials of greater than 6 millimeters thickness shipped between 70 signatory countries be debarked and then heated or fumigated with methyl bromide. A stamped seal on treated pallets and crates marks compliance. Treatment costs about $1.50 per pallet, amounting to an estimated $437 million in up-front costs (calculated in 2004 dollars). Treated pallets can be recycled, however, and have an average lifespan of six years.

Economists often focus on the costs of infestation for the forestry industry. But the expense of removing and replacing dead trees mostly falls on homeowners and local governments.

Ash trees (Fraxinus spp.) line city streets and fill agricultural windbreaks throughout much of North America — 38 million landscape trees in the 25 states surrounding Detroit, according to US Forest Service estimate. Ash species are important constituents of native forest ecosystems, particularly the hardwood forests of the east and ash wood is popular for bows, baseball bats, firewood, and electric guitar bodies.

“Sometimes you don’t have a choice to manage pests once they’re here. You can’t leave a dead tree to fall on someone’s house,” said Leung. “So even though preventative treatment is expensive and doesn’t keep out 100% of wood borers, when you incorporate all the data, this preventative policy is still worth it. ISPM15 could probably be more effective, but we should not underestimate the benefits of even delaying the arrival of new pests, which may avoid the cost of another emerald ash borer for a generation.”

Brian Leung, Michael R. Springborn, James A. Turner, and Eckehard G. Brockerhoff 2014. Pathway-level risk analysis: the net present value of an invasive species policy in the US. Frontiers in Ecology and the Environment (e-View) http://dx.doi.org/10.1890/130311

The Nature Conservancy, the National Center for Ecological Analysis and Synthesis (under NSF grant #DEB-0553768), the University of California, Santa Barbara, and the State of California funded this study.