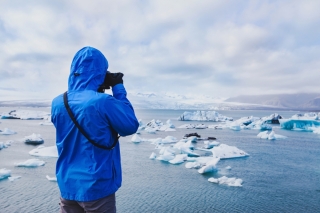 Shipping and mining in the Arctic. The spread of invasive microbial pathogens around the world. Changing agricultural practices. Use of genomic-modification tools. Those are among the 14 most significant issues that could affect the science and management of invasive species over the next two decades, according to an international team of ecologists, who published their findings in the journal Trends in Ecology and Evolution.

“Environmental, biotechnological and sociopolitical trends are transforming risks of invasion worldwide. We have identified some potential game-changers,” says Prof. Anthony Ricciardi (McGill University), who led the study by 17 scientists from eight countries.

The journal article stems from a workshop organized by Prof. Ricciardi at the University of Cambridge last September, which gathered some of the world's leading ecologists. Among the major risks they identified:

Globalization of the Arctic

Until now, the Arctic has been among the least accessible regions on the planet, escaping extensive and devastating alien species invasions like those that have struck temperate and tropical areas of the world. But the rapid loss of sea ice is opening the region to shipping, oil and mineral extraction, fishing, tourism, and shoreline development – all of which facilitate introductions of alien species.

The loss of sea ice is also creating a major new corridor for international shipping between the Pacific and Atlantic Oceans, which will affect invasion risks throughout the Northern Hemisphere. “The gold rush has begun for major expansion of human activities in the Arctic, with the potential to cause large-scale alien species transfers” says Dr. Greg Ruiz (Smithsonian Environmental Research Center).

Disease-causing bacteria, water molds, fungi and viruses are being given increasing opportunities to spread into regions where they never previously existed and where they may attack new hosts. They can also undergo rapid genetic changes that cause previously innocuous forms to become virulent.

Invasive microbes have devastated populations of animal and plants that have had no evolutionary exposure and thus no immunity to them. Recent examples include: the chytrid fungus “Bsal” that is killing salamanders in Europe; the white-nose fungus that is destroying bat colonies in North America; and sea star wasting disease along the Pacific coast of North America, considered to be the cause of perhaps the worst wildlife die-off ever recorded. The proliferation of microbial pathogens is a growing threat to biodiversity, agriculture, forestry and fisheries.

Advances in genomic modification tools hold both promise and challenges for managing invasive species. Very recently, genetically modified versions of an invasive mosquito were released in the Florida Keys in a controversial attempt to interfere with the mosquito’s reproductive life cycle, thereby preventing it from transmitting the invasive Zika, Dengue and Chikungunya viruses to humans. “The push to use genetically modified agents to control invasive species will continue to grow”, says Prof. Hugh MacIsaac (University of Windsor), “and with it will come public opposition and the view that we are opening Pandora's Box”.

The team also identified changing agricultural practices as a potential source of invasion threats. Virtually unregulated new agricultural crops and practices open the door to potentially disastrous unintended consequences. An Asian cricket species reared for “cricket flour” – all the rage in the USA – has already established in the wild. Worse, as a disease ravages this species, farmers have imported other kinds of crickets that might well invade in nature.

But possibly the biggest threat of all is the growing use by agribusiness of soil bacteria and fungi to increase crop production. “The cultivation and distribution of ‘growth enhancing’ microbes could cause some crop plants or plant species residing near agricultural fields to become invasive pests” says Prof. Daniel Simberloff (University of Tennessee).

An additional challenge is public perception of invasion science. Scientific evidence on invasive species impacts is under attack, with much of the opposition value-based rather than science-based. This form of science denialism involves a rejection of peer-reviewed evidence along with an attempt to re-frame, downplay or even deny the role of invasive alien species in global environmental change.

“Denialism in science is not new, but its growth in the context of invasive species is especially worrying for people trying to conserve native biodiversity” says Prof. Tim Blackburn (University College London). “Manufacturing doubt about the negative impacts of invasive species can delay mitigating action to the point where it is too late.”