The right amount of vitamin D for babies 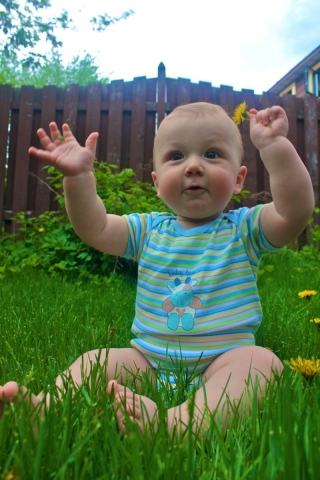 A new study led by Prof. Hope Weiler, from the School of Dietetics and Human Nutrition at McGill University and by Dr. Celia Rodd of McGill’s Department of Pediatrics, has just confirmed that 400 IU of vitamin D daily is sufficient for infant health.

“There’s sometimes a feeling that more is better,” says Prof. Weiler. “But until now, no one had compared the popularly recommended daily doses of vitamin D to see what will result in optimal health for infants, so we were very glad to be able to do this.”

Current recommendations about how much vitamin D a baby needs daily in order to build healthy bones and prevent rickets vary widely. In France and Finland, the recommended daily dose is of 1,000 IU for infants. At the lower end of the scale, Health Canada and the World Health Organization both recommend a daily dose of 400 IU. The Canadian Pediatric Society distinguishes between winter and summer months and recommends that infants be given 800 IU per day during the winter when babies get less exposure to sunshine. (Vitamin D is sometimes called the “sunshine vitamin” because with enough sunshine, most people can make it themselves. Babies are not expected to do so and our northern climate limits synthesis in the colder months from about October to April.).

The team followed a group of 132 infants in Montreal who were randomly assigned to receive different daily doses of vitamin D (400 IU per day, 800 IU, 1200 IU and 1600 IU) over a period of 12 months. After their initial intake in the study, the researchers then measured the babies’ weight, length, and head circumference, as well as the levels of vitamin D in their blood at three months, six months, nine months and a year of age. They also looked at how much mineral was added to the babies’ bones as they grew.

It was clear, as early as the three-month mark, that there was no advantage to the higher doses of vitamin D and that 400 IU per day was sufficient. “The parents that we saw in the study were highly motivated and made sure that their babies were taking the vitamin D on a daily basis,” says Dr. Rodd. The researchers concluded that higher doses provided no additional benefits in terms of helping babies grow a healthy skeleton.

The researchers acknowledge that their infant group had fairly good amounts of vitamin D at the beginning of the study. Therefore, whether higher amounts are needed in infants with lower vitamin D at birth still needs to be clarified.

To read the full study in the Journal of the American Medical Association: http://jama.jamanetwork.com/article.aspx?volume=309&page=1785

The research was funded by the Canadian Institutes of Health Research: http://www.cihr-irsc.gc.ca/e/193.html; and by the Nutricia Research Foundation; http://www.nutricia-research-foundation.org/