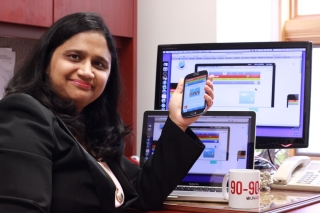 It is estimated that 30-40 per cent of people living with HIV do not know their HIV status, which can have a serious effect on the spread of the disease. One of the approaches developed to help change this statistic, especially among populations at higher risk for infection and who lack access to care, is the development of HIV self-testing, which provides people with an HIV diagnostic test that they can use in private. Now this screening strategy is getting a global push thanks to a major new partnership between the Research Institute of the McGill University Health Centre (RI-MUHC), Sympact-X and The International Association of Providers of AIDS Care (IAPAC), a key player in the fight against HIV/AIDS. This partnership with IAPAC will allow the implementation of HIVSmart!™ – a software and cloud based application that facilitates HIV self-testing, linkages  and retention in care – in high HIV burden Fast-Track Cities worldwide.

HIVSmart!™ is a multilingual, portable application that has been developed by a team of scientists and physicians based at the RI-MUHC and at McGill University. It has been tested in well-designed studies in Canada and South Africa in diverse patient groups, including high-risk men who have sex with other men; at-risk community clinic attendees; low-risk healthcare professionals; and student populations. The application, which works with any approved HIV self-test, is personalized, assesses user’s HIV exposure risk, provides test interpretation, and links users to care. In addition, the app based program assists with retention in care through enhanced patient-provider communication. The platform is confidential and HIPPA compliant and is currently available in six languages.

“The global scale up of HIVSmart!™ with IAPAC is a dream come true,” says Dr. Nitika Pant Pai, who is an Associate Professor at McGill University, a Medical Scientist at the RI-MUHC and Founder/President of the RI-MUHC start-up Sympact-X. “It will help to bridge the gap between HIV services and populations who are most vulnerable to infection and less likely to be able to access diagnosis and treatment. HIVSmart!™ will also facilitate self-testing, plug service delivery gaps and provide rapid HIV treatment initiation, ultimately leading to what we hope will be an AIDS-free generation.”

The Fast-Track Cities is a global partnership between the City of Paris, International Association of Providers of AIDS Care (IAPAC), the Joint United Nations Programme on HIV/AIDS (UNAIDS), and the United Nations Human Settlements Programme (UN-Habitat), in collaboration with local, national, regional, and international partners and stakeholders. Since its launch on World AIDS Day 2014, cities in every region of the world have joined the Fast-Track Cities network, pledging to attain 90-90-90 targets by 2020. The targets translate into 90 per cent of people living with HIV (PLHIV) knowing their status, 90 per cent of PLHIV who know their status linked to care and who are initiated on antiretroviral therapy (ART), and 90 per cent of PLHIV on ART achieving viral suppression. HIV self-testing and the use of apps to promote HIV self-testing, linkage to care, and retention in care are strongly recommended in the 2015 IAPAC Guidelines for Optimizing the HIV Care Continuum for Adults and Adolescents, as well as the 2017 IAPAC/ASLM Recommendations for the Rapid Expansion of HIV Self Testing in Fast-Track Cities.

“IAPAC is proud to partner with the RI-MUHC and SYMPACT-X to introduce and scale-up the implementation of the HIVSmart™ app as an innovative means of assisting Fast-Track Cities to attain the 90-90-90 targets – starting with the first 90 without which we cannot succeed in reaching the estimated 40 per cent of PLHIV worldwide who do not know their status,” says Dr. José M. Zuniga, President/CEO of the International Association of Providers of AIDS Care (IAPAC).

“HIV self-testing is an empowering and innovative way of reaching key populations with undiagnosed HIV. There is often stigma and discrimination associated with going to an HIV clinic to be tested, but technology could play an important role to end the global HIV epidemic, and I am proud of our scientists, like Dr. Nitika Pant Pai, for being part of resolving this challenge,” says Dr. Bruce Mazer, Interim Executive Director and Chief Scientific Officer of the RI-MUHC.

The International Association of Providers of AIDS Care (IAPAC) represents more than 30,000 clinicians and allied health care professionals in over 150 countries. Its mission is to improve the quality of and increase access to HIV prevention, care, treatment, and support services for men, women, and children affected by and living with HIV and comorbid conditions such as tuberculosis and viral hepatitis. For more information about IAPAC and its 30-year history of marshaling the health professions to end the AIDS epidemic, please visit www.iapac.org.

The Research Institute of the McGill University Health Centre (RI-MUHC) is a world-renowned biomedical and healthcare research center. The Institute, which is affiliated with the Faculty of Medicine of McGill University, is the research arm of the McGill University Health Centre (MUHC) – an academic health center located in Montréal, Canada, that has a mandate to focus on complex care within its community. The RI-MUHC supports over 460 researchers and close to 1,300 research trainees devoted to a broad spectrum of fundamental, clinical and health outcomes research at the Glen and the Montréal General Hospital sites of the MUHC. Its research facilities offer a dynamic multidisciplinary environment that fosters collaboration and leverages discovery aimed at improving the health of individual patients across their lifespan. The RI-MUHC is supported in part by the Fonds de Recherche du Québec – Santé (FRQS). www.rimuhc.ca

Sympact-X, is a Canadian social enterprise, based in Montreal, founded with the support of Grand Challenges Canada, (funded by the Government of Canada) and RI-MUHC. Its social mission is to take tested digital health innovations that plug service delivery gaps in diagnostics and treatment to scale worldwide to impact global health. Sympact-X aims to scale HIVSmart!™ with smart partnerships worldwide.