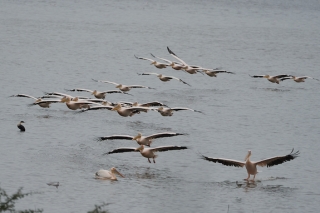 Migratory waterbirds are particularly exposed to the effects of climate change at their breeding areas in the High Arctic and in Africa, according to a new study published in Bird Conservation International. The research team came to this conclusion after modelling climatic and hydrological conditions under current and future climate scenarios (in 2050) and comparing the impact on the distribution of 197 of the 255 waterbird species listed under the Agreement on the Conservation of African-Eurasian Migratory Waterbirds (AEWA). The international team was led by Wetlands International, BirdLife International, and the British Trust for Ornithology, involved researchers from various universities, including McGill. The results suggest that investing more in habitat conservation in the wider landscape, in addition to the conservation of managed protected areas, is urgently needed to help migratory waterbirds adapt to the impacts of climate change.

“Most of the earlier studies in the African-Eurasian flyways focused on the impact of climate change on Palearctic birds,” says Frank Breiner, from Wetlands International, who developed the species distribution models. “Our results suggest that Afrotropical species will be even more exposed to the impact of climate change than most species from the temperate zone of the Palearctic. Species breeding in Southern and Eastern Africa, such as the already globally threatened Maccoa Duck and White-winged Flufftail are particularly exposed, but some still common species, such as the Cape Teal and Red-knobbed Coot are projected to suffer a net range loss exceeding 30%. Afrotropical species seem to be more sensitive to the changes in precipitation than Palearctic ones.”

“Our models project a variety of changes in the water cycle that will affect the dynamics and extent of wetlands,” explains Bernhard Lehner, an Associate Professor in the Department of Geography at McGill University who led the hydrological modelling work. “This will make the species that depend on them vulnerable, as they will need to cope with alterations to their breeding grounds and natural habitats.”

The modelling highlighted areas of particular concern in terms of major reductions in freshwater flows and wetland area. These include the Mediterranean region, in the Tigris and Euphrates drainage basin of the Middle East, in West Africa such as the Gambia river, as well as in the Upper Zambezi and Okavango catchments in Southern Africa. Projected changes in river flow, species distribution and suitability of key sites for African-Eurasian waterbirds are available at the Critical Site Network Tool 2.0.

“Our findings will assist national authorities to anticipate the hydrological changes that may unfold through climate change and to have a better picture of how predicted climate change might impact migratory waterbirds and the sites for which they have responsibility,” notes Vicky Jones, Flyways Science Coordinator at BirdLife International. “Feeding this information into planning and management of national site networks and policies affecting the wider landscape will be vital in ensuring populations of migratory waterbird species can be secured and supported by national site networks in the future.”

“Whilst protected areas will remain vital for waterbird conservation in the future, projected negative impacts on dispersive and northern breeding populations suggest that wider climate change adaptation measures, such as controlling agricultural drainage, protecting open habitats from forestry and wetland restoration may also be necessary outside of protected areas,” notes James Pearce-Higgins, Science Director at BTO.

Need for an integrated approach

“The results presented in this paper have significant policy implications for flyway scale conservation of migratory waterbirds in the face of climate change,” says Jacques Trouvilliez, Executive Secretary of AEWA. “The research is not only providing increased knowledge about the vulnerability of species and their habitats to climate change on a flyway scale, it is also giving us a better understanding as to where we need to focus climate related adaptation activities for AEWA species.”