Puffins stay cool thanks to their large beak

Seabirds with large bills may be capable of longer flights 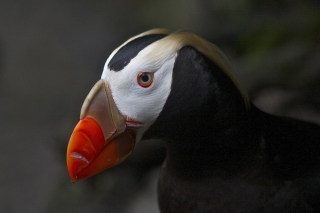 Tufted puffins regulate their body temperature thanks to their large bills, an evolutionary trait that might explain their capacity to fly for long periods in search for food.

In a new study published in the Journal of Experimental Biology, researchers from McGill University and the University of California, Davis, used thermal imaging cameras to measure heat dissipation off the bodies and beaks of wild tufted puffins in the minutes after flying.

Their data showed that within 30 minutes of landing, the temperature of the puffin beaks dropped by 5°C (25°C - 20°C), while the heat radiating from their backs hardly changed. The beak “accounted for 10-18% of total heat exchange despite making up only 6%” of the bird’s total surface area.

But why would puffins have evolved such a large bill? Kyle Elliott, a professor in McGill’s Department of Natural Resource Sciences, thinks it could have to do with the energy they use when they fly.

Energetically speaking, flying is very taxing to birds. During flight, the thick-billed murre –which is closely related to the puffin - has an energy expenditure 31 times greater than when resting, the largest ever measured in vertebrates. This produces significant amounts of heat, says Elliott, the study’s senior author, suggesting that some birds evolved a large bill to help them cool down when they fly.

“The avian bill is a classic example of how evolution shapes morphology,” Elliott said.

To illustrate, Hannes Schraft, the study’s lead author and formerly a doctoral student in the Biology Department at the University of California, explained that “thick-billed murres (and presumably puffins) produce about as much heat as a light bulb when they are flying.”

“Our results support the idea that body heat regulation has played a role in shaping some bird beaks. We think this also an example of exaptation, which means that an external structure is amplified to serve a new function; much in the same way the desert hare’s ears became bigger to help them cool down,” Elliott adds.

“We tried to figure out whether puffins use their impressively large beaks to dump extra body heat when they fly,” says Schraft, who is now a postdoctoral fellow at Université du Québec à Montréal.

“We thought this might be the case because previous research has shown this to be the case in toucans and hornbills, bird species who also have very large bills.”

Because of its feathers, a bird’s body is very well insulated so thermoregulation can’t happen through sweating. Instead, the bill serves as a radiator when it needs to cool down - the equivalent of humans sweating on a hot summer day.

Schraft admits that this can seem counter intuitive. After all, when birds get cold, we often see them hide their beak in their feathers to stay warm. Furthermore, biologists have demonstrated that on average, birds that live in cold climates have a smaller bill.

Because the tufted puffins studied by Schraft live in Alaska, a smaller bill would have been, evolutionary speaking, the most logical outcome. However, competing needs might explain why puffins buck this trend.

“Overheating can be a big problem for seabirds who need to fly long distances to feed their chicks during breeding season,” says Schraft. “Puffins may have been able to overcome this problem by evolving a larger bill.”

“Huffin’ and puffin: seabirds use large bills to dissipate heat from energetically demanding flight” by Hannes A. Schraft, Shannon Whelan and Kyle H. Elliott (doi: 10.1242/jeb.212563) was published in the Journal of Experimental Biology.

This work received financial support from the Natural Sciences and Engineering Research Council of Canada and the Canada Research Chair in Arctic Ecology.