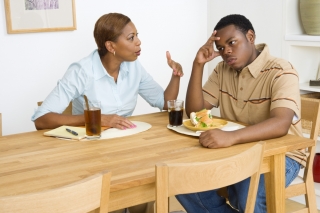 Head movements play an important role in conveying emotions through speech and music. Let your head do the talking.

When people talk or sing, they often nod, tilt or bow their heads to reinforce verbal messages.  But how effective are these head gestures at conveying emotions?

Very effective, according to researchers from McGill University in Montreal.  Steven R. Livingstone and Caroline Palmer, from McGill’s Department of Psychology, found that people were highly accurate at judging emotions based on head movements alone, even in the absence of sound or facial expressions.

This finding suggests that visual information about emotional states available in head movements could aid in the development of automated emotion recognition systems or human-interaction robots, the researchers say. Expressive robots could potentially serve a range of functions, particularly where face-to-face communication is important, such as at hotel reception desks and as interactive care robots for the elderly. Using motion-capture equipment to track people’s head movements in three dimensions, Livingstone and Palmer recorded vocalists while they spoke or sang with a variety of emotions. The researchers then presented these video clips to viewers without any sound, with the facial expressions of vocalists hidden so that only their head movements were visible.  Viewers were then asked to identify the emotions that the vocalists intended to convey.

“We found that when people talk, the ways in which they move their head reveal the emotions that they’re expressing.  We also found that people are remarkably accurate at identifying a speaker’s emotion, just by seeing their head movements,” says Palmer, who holds the Canada Research Chair in Cognitive Neuroscience of Performance.

“While the head movements for happy and sad emotions differed, they were highly similar across speech and song, despite differences in vocal acoustics”, says Livingstone, a former postdoctoral fellow in the Palmer lab and now a postdoctoral fellow at McMaster University. “Although the research was based on North American English speakers, the focus on head movements creates the possibility for studying emotional communication in contexts where different languages are spoken”.

The idea for the study emerged from a noisy pub. “One night in Montreal I was in a bar with my lab mates”, explains Livingstone, “It was a lively evening, with lots of people, dim lights, and some very loud music. At one point my friend started to talk me; I knew he was excited though I couldn’t make out what he was saying or see his face clearly.  Suddenly I realized it was the animated way that he was bobbing his head that told me what he was trying to say”.

Adds Palmer, “Our discovery may lead to new applications in situations where sound is not available, such as automated recognition of emotional states in crowd behavior or in hearing impairments, by making use of head movements when watching someone talk. It also has applications in computing and robotics, where the addition of expressive head movements may help make humanoid robots more lifelike and approachable."

This research was funded in part by an NSERC-CREATE Postdoctoral Fellowship to Dr Steven R. Livingstone and by a Canada Research Chair and NSERC Grant to Dr Caroline Palmer.