How bacteria and carpenter ants became one 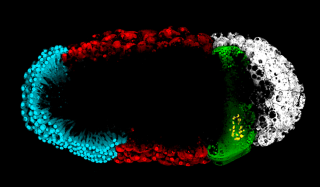 Researchers from McGill University have revealed the steps by which two very distinct organisms – bacteria and carpenter ants – have come to depend on one another for survival to become a single complex life form. The study, published today in Nature, shows that the two species have collaborated to radically alter the development of the ant embryo to allow this integration to happen. Understanding how such grand unifications originate and evolve is a major puzzle for biologists. Ehab Abouheif, a biologist and senior author on the paper believes that these insights may lead to a better understanding of the origin of complex organisms.

The bacteria Blochmannia and members of the hyper-diverse ant tribe Camponotini have forged a symbiotic relationship that goes back 51 million years in which each species can no longer survive without the other (termed obligate endosymbiosis by biologists). The ants are thought to have initially ingested the bacteria from sap-sucking insects called hemipteran bugs, with whom they share an ecological niche. The bacteria, which live inside the cells of the ant, helps regulate the size distribution of workers in the colony by enhancing the ants’ ability to synthesize nutrition. The ants, in turn, provide the bacteria with a protected cellular environment and ensure their survival from one generation to the next. But how they came together has been unclear until now.

The researchers began to look closely at genes that regulate the germline, the material that contains the genetic information (such as ova and sperm in humans) that is passed from one generation to the next, after observing that the bacteria completely surrounds the germline.

“Instead of the germline genes being localized in just one location in the egg like all other insects, now they are in four. No one has ever seen anything like this in any other insect,” says Arjuna Rajakumar, a senior PhD student in Prof. Abouheif’s lab and a first co-author of the paper with Ab. Matteen Rafiqi, a former postdoc in the Abouheif lab who is now based at Bezmialem Vakif University in Istanbul. “We were also surprised that the hox genes, which set up the layout of the body and normally come on late in embryo development appeared very early and localize in the same four locations as the germline genes.” says Rafiqi.

“The localization of these genes in these 4 different areas creates a system of coordinates in the ant embryo, where each performs a different function to integrate the bacteria.” says Abouheif.

Uncovering the steps towards a major evolutionary transition

Working with over 30 closely-related species of ants allowed the researchers to reconstruct the steps in this unification. They discovered that the merger happened in a series of steps, going from embryos where germline genes were localized in only one location, until eventually both germline and hox genes could be found in all four. However, a major surprise was that embryos with two locations of these genes evolved prior to the merger between the two species. This means that there was a pre-existing capacity to evolve new locations within the ant embryos, which the bacteria were then able to exploit to make radical alterations to embryo development and integrate the two species.

To read “Origin and elaboration of a major evolutionary transition in individuality” by Ab. Matteen Rafiqi, Arjuna Rajakumar and Ehab Abouheif in Nature: