Tectonic faults shown to have rougher patches that are stronger, resistant to earthquake slip 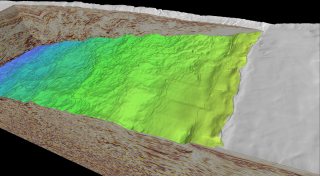 A new study led by McGill University has found that tectonic plates beneath the Earth’s surface can show varying degrees of roughness and could help explain why certain earthquakes are stronger than others.

Earthquakes happen when the rocks beneath the Earth’s surface break along geological fault lines and slide past each other. The properties of these faults - such as the roughness of their surface - can have an influence on the size of seismic events, however their study has been challenging because they are buried deep beneath the Earth’s surface.

In order to have a better understanding of the characteristics of these faults, researchers from McGill University, the University of California Santa Cruz and Ruhr University Bochum in Germany used high-resolution seismic reflection data to map and measure the roughness of 350 km2 of a plate boundary fault located off the Pacific coast of Costa Rica.

“We already knew that the roughness of a fault was an important factor, but we did not know how rough faults in the subsurface truly are, nor how variable the roughness is for a single fault,” says James Kirkpatrick, a professor in McGill’s Department of Earth and Planetary Sciences.

In a recently published study in Nature Geoscience, Kirkpatrick and his colleagues were able to show that some parts of the studied fault have a rougher surface than others.

Historically, the earthquakes that have occurred in this part of the world have been moderately large (M7) and Kirkpatrick, who is also the study’s first author, believes the rough patches they found might be the reason why.

“These rough patches are stronger and more resistant to earthquake slip,” he says. “The historical record of earthquakes is relatively short, so we can’t say with certainty that larger ones have not occurred. Future seismic events in the area, which will be recorded with modern equipment, should help us determine if they show the same limited magnitude.”

Kirkpatrick and his colleagues also hope to apply their methods to other subduction zones where similar geophysical data is available to start to evaluate whether their conclusions are generally applicable.

“This connection between the fault roughness and earthquake magnitude might one day help us understand the size and style of earthquakes most likely to occur a given fault.”

Image caption: Researchers from McGill University, the University of California Santa Cruz, Ruhr University Bochum in Germany and USGS used high-resolution seismic reflection data to map and measure the roughness of 350 km2 of a plate boundary fault located off the Pacific coast of Costa Rica.

This work received financial support from Natural Sciences and Engineering Research Council of Canada and the National Science Foundation.