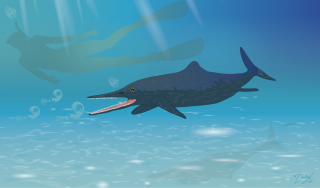 Hauffiopteryx altera (Latin for different from) has been identified as a new species of Ichthyosaurs by researchers from McGill University and the State Museum of Natural History Stuttgart in Germany.

Ichthyosaurs (‘fish lizards’), a group of tuna-shaped reptiles that inhabited Earth’s seas during the Mesozoic Era, were discovered by scientists in the early 19th century. Similar to the modern-day dolphin, ichthyosaurs underwent profound adaptions to aquatic environments including limbs transformed into flippers, a dorsal fin, and a tail fin.

Following a meticulous study of all specimens related to Hauffiopteryx typicus, a small 2-meter-long species, it was revealed that a single specimen in Germany was in fact different.

“Although the marine ecosystems are generally similar across Europe during this time, we are finding there are some rare and possibly endemic species,” explains Dirley Cortés, a graduate student under the supervision of Prof. Hans Larsson at McGill’s Redpath Museum and co-author of the study published in Palaeontologica Electronica. “This finding will have a lot to say about how these ancient ecosystems functioned.”

The fossils were retrieved in the Posidonia Shale, an Early Jurassic geological formation located at the axis of Austria, the Czech Republic, Germany, Luxembourg, the Netherlands and Switzerland. Quarried for over 200 years, the site has yielded thousands of spectacularly preserved ichthyosaur skeletons ranging between two and more than ten meters in length and representing seven species. Fossilized soft tissues, stomach contents and embryos were also discovered.

“We were surprised to discover that this small dolphin-sized specimen, collected decades ago, is a new species,” remarked Erin Maxwell, curator of fossil aquatic vertebrates at the State Museum of Natural History Stuttgart and lead author of the study. “There is quite a lot of diversity still waiting to be discovered in our vast museum collections”.