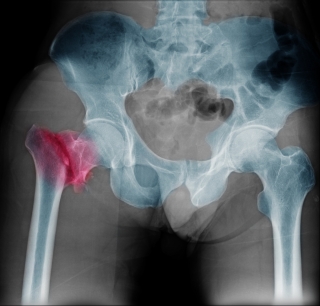 The largest study ever to investigate the genetics of osteoporosis and fracture risk determined that only two examined factors – bone mineral density (BMD) and muscle strength – play a potentially causal role in the risk of suffering osteoporotic fracture, a major health problem affecting more than 9 million people worldwide very year. Other clinical risk factors like vitamin D levels and calcium intake, historically considered to be crucial mediators of fracture, were not found to directly predispose people in the general population to fracture. This research was published in the BMJ.

“These findings suggest that interventions aimed at increasing bone strength are more likely to prevent fractures than widespread supplementation with vitamin D,” said Dr. Brent Richards, a genetic epidemiologist at the Lady Davis Institute at the Jewish General Hospital and Professor of Medicine at McGill University, and one of the senior investigators on the paper. “Our study, the first genome-wide association study for fracture risk, has provided important insight on the biologic mechanisms leading to fracture and how to prevent it.”

An international team of researchers collaborated to examine data from 185,057 cases and 377,201 controls part of the Genetic Factors of Osteoporosis (GEFOS) Consortium, the UKBiobank Study and the 23andMe biotech company. The study was co-led by researchers from McGill University and the Erasmus University Medical Center in Rotterdam, The Netherlands.

“Our research confirms that BMD is the most important determinant of fracture risk and that prevention strategies aimed at increasing or maintaining bone density are the most likely to be successful,” Dr. Richards pointed out. “One of the most important aspects of this research is the robust evidence showing that vitamin D supplementation in the general population is unlikely to be effective for the prevention of fracture. This will encourage clinicians to focus patients on building bone density as a more effective preventive measure against fracture.”

The researchers came to these conclusions by demonstrating that the genetic factors that lead to lowered vitamin D levels in the general population do not increase risk of fracture.

Approximately 30% of people over the age of sixty-five take Vitamin D supplements partly because clinical guidelines for osteoporosis management and fracture prevention suggest such supplements. However, recent large randomized controlled clinical trials have failed to confirm any benefit of vitamin D supplementation in patients without pronounced deficiency of these factors. Thus, these findings and those derived from this study highlight the need to re-assess its wide-spread use in clinical practice.

The authors do caution that patients using osteoporosis medication should not discontinue their supplements before consulting with their treating physicians. Maintaining a healthy diet, remaining physically active, and fifteen minutes of sun exposure everyday are the main pillars of a sustainable bone health. These results do also not apply to individuals with low vitamin D levels.

For media inquiries, and to arrange interviews with Dr. Richards contact:

For more about the Lady Davis Institute: www.ladydavis.ca

For more about the Jewish General Hospital: www.jgh.ca