New cause for concern over weedkiller glyphosate 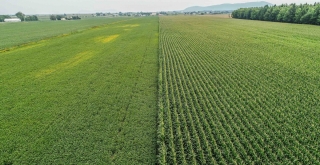 New research from McGill University reveals an overlooked impact that the widely used herbicide glyphosate may be having on the environment.

First commercialized by Monsanto under the name Roundup, glyphosate has come under scrutiny in the past, mostly in relation to its potential toxicity. This new research, published recently in the Ecological Society of America’s Frontiers in Ecology and the Environment, focuses not on direct health risks associated with the herbicide, but on its contribution to environmental phosphorus levels, an issue that has yet to receive much attention.

“No one has thus far investigated the impact of glyphosate use on phosphorus loads in agricultural areas, most likely because pesticides have always been considered a negligible source of nutrients,” says Marie-Pier Hébert, lead author of the study and a doctoral student in the Department of Biology at McGill University.

In many agricultural areas, decades of phosphorus-based fertilizer use have led to a saturation of the soil’s capacity to hold the nutrient. This increases the likelihood that any additional phosphorus applied to the land will run off into waterways, where it is a known cause of harmful algal blooms and deoxygenation leading to fish death.

Until now, regulations to limit phosphorus pollution have focused on the use of fertilizers, which remain the largest artificial source of phosphorus. But as the use of glyphosate increases – the past two decades alone have seen global use increase 15-fold – the herbicide’s relatively small phosphorus content starts to add up, reaching levels comparable to other sources, like detergents, that have attracted regulators’ attention in the past.

“Our study argues that the recent and rapid rise in glyphosate use has magnified its relative importance as a source of anthropogenic phosphorus, especially in areas of intensive corn, soybean and cotton cultivation,” Hébert says.

The McGill research team – Marie-Pier Hébert, Vincent Fugère and Andrew Gonzalez – used data from the US Geological Survey and the UN Food and Agriculture Organization to calculate the relative contributions of glyphosate and fertilizers to the total amount of phosphorus being applied to agricultural land in the United States and elsewhere. They also reviewed existing studies to bring to light the mechanisms by which glyphosate contributes to phosphorus levels in the soil and phosphorus outflows to waterways.

They conclude that glyphosate use can no longer be disregarded in monitoring and managing phosphorus levels in areas where the herbicide is used extensively.

“Given the steadily increasing applied tonnage of glyphosate worldwide and the large-scale adoption of genetically engineered resistant crops in multiple countries, it is imperative that we broaden the discourse of the environmental impacts of this pesticide,” Hébert says.

To read the paper:

[Photo: The adoption of genetically engineered glyphosate-resistant crops such as soy (left) and corn (right) goes hand in hand with the increasing use of the herbicide and its impact on environmental phosphorus levels. / Vincent Fugère]