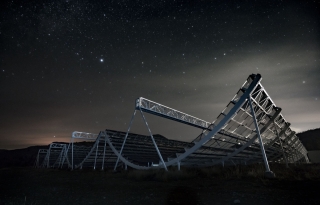 A Canadian effort to build one of the most innovative radio telescopes in the world will open the universe to a new dimension of scientific study. The Honourable Kirsty Duncan, Minister of Science, today installed the final piece of this new radio telescope, which will act as a time machine allowing scientists to create a three-dimensional map of the universe extending deep into space and time.

The Canadian Hydrogen Intensity Mapping Experiment, known as CHIME, is an extraordinarily powerful new telescope. The unique “half-pipe” telescope design and advanced computing power will help scientists better understand the three frontiers of modern astronomy: the history of the universe, the nature of distant stars and the detection of gravitational waves.

By measuring the composition of dark energy, scientists will better understand the shape, structure and fate of the universe. In addition, CHIME will be a key instrument to study gravitational waves, the ripples in space-time that were only recently discovered, confirming the final piece of Einstein’s theory of general relativity.

CHIME is a collaboration among 50 Canadian scientists from the University of British Columbia, the University of Toronto, McGill University, and the National Research Council of Canada (NRC). The $16-million investment for CHIME was provided by the Canada Foundation for Innovation and the governments of British Columbia, Ontario, and Quebec, with additional funding from the Natural Sciences and Engineering Research Council and the Canadian Institute for Advanced Research. The telescope is located in the mountains of British Columbia’s Okanagan Valley at the NRC’s Dominion Radio Astrophysical Observatory near Penticton.

“CHIME is an extraordinary example showcasing Canada’s leadership in space science and engineering. The new telescope will be a destination for astronomers from around the world who will work with their Canadian counterparts to answer some of the most profound questions about space. Our government believes in providing scientists with the opportunities and tools they need to pursue the answers to questions that keep them up at night.” – The Honourable Kirsty Duncan, Minister of Science

“With the CHIME telescope we will measure the expansion history of the universe and we expect to further our understanding of the mysterious dark energy that drives that expansion ever faster. This is a fundamental part of physics that we don’t understand and it’s a deep mystery. This is about better understanding how the universe began and what lies ahead.” – Dr. Mark Halpern, University of British Columbia

“CHIME’s unique design will enable us to tackle one of the most puzzling new areas of astrophysics today – Fast Radio Bursts. The origin of these bizarre extragalactic events is presently a mystery, with only two dozen reported since their discovery a decade ago. CHIME is likely to detect many of these objects every day, providing a massive treasure trove of data that will put Canada at the forefront of this research.” – Dr. Victoria Kaspi, McGill University

“CHIME ‘sees’ in a fundamentally different way from other telescopes. A massive supercomputer is used to process incoming radio light and digitally piece together an image of the radio sky. All that computing power also lets us do things that were previously impossible: we can look in many directions at once, run several experiments in parallel, and leverage the power of this new instrument in unprecedented ways.” – Dr. Keith Vanderlinde, University of Toronto

• Video: Timelapse of the construction of the CHIME telescope

• Video: Footage of the CHIME telescope

• Video: CHIME and dark energy (from University of British Columbia)