Computer models found to overestimate warming rate in some regions, underestimate it in others 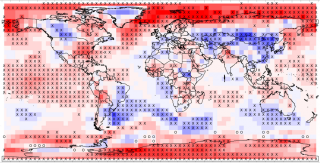 A new method for projecting how the temperature will respond to human impacts supports the outlook for substantial global warming throughout this century – but also indicates that, in many regions, warming patterns are likely to vary significantly from those estimated by widely used computer models.

The new method, outlined by McGill University researchers in Geophysical Research Letters, is based on historical temperature increase in response to rising greenhouse gas concentrations and other climate influences. This approach could be used to complement the complex global climate models, filling a need for more reliable climate projections at the regional scale, the researchers say.

“By establishing a historical relationship, the new method effectively models the collective atmospheric response to the huge numbers of interacting forces and structures, ranging from clouds to weather systems to ocean currents,” says Shaun Lovejoy, a McGill physics professor and senior author of the study.

“Our approach vindicates the conclusion of the Intergovernmental Panel on Climate Change (IPCC) that drastic reductions in greenhouse gas emissions are needed in order to avoid catastrophic warming,” he adds. “But it also brings some important nuances, and underscores a need to develop historical methods for regional climate projections in order to evaluate climate-change impacts and inform policy.”

In particular, the new approach suggests that for over 39% of the globe, the computer models either overestimate or underestimate significantly the pace of warming, according to Lovejoy and his co-author, PhD student Raphaël Hébert (now at the Alfred-Wegener-Institut, in Potsdam.

These areas of significant difference are indicated by the x’s in the map above. For example, the map shows that the IPCC projections are expected to be too warm (red x’s) over vast parts of the Pacific Ocean, the North Atlantic Ocean, and the Indian Ocean, while the opposite is true for the South Atlantic Ocean and the part of the Indian Ocean south of Australia.  In contrast, the projected warming is expected to be underestimated (blue) over northwestern Canada and central Asia -- and a seasonal analysis reveals that this is primarily due to an underestimate of the warming in winter months.  (Dark red indicates 3-degree Celsius model overestimate, dark blue 3-degree underestimate if CO2 is doubled).

“Global climate models are important research tools, but their regional projections are not yet reliable enough to be taken at face value,” Hébert and Lovejoy assert. “Historical methods for regional climate projections should be developed in parallel to traditional global climate models. An exciting possibility for further improvements will be the development of hybrid methods that combine the strengths of both the historical and traditional approaches.”

"Regional Climate Sensitivity and Historical Based Projections to 2100," by Hébert, R., and S. Lovejoy is published in Geophysical Research Letters.