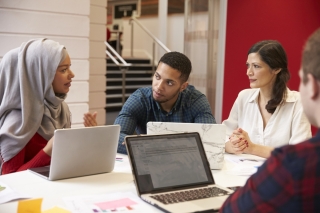 Researchers from McGill and Concordia universities have teamed up to examine how Quebec's secularism law, Law 21, is affecting the career choices and experiences of discrimination of students, particularly in the province's faculties of law and education. The law, which bans some public servants, including teachers in the public system and prosecutors, from wearing religious symbols at work, was implemented in June 2019. The researchers sent out an on-line bilingual survey between mid-October 2020 and early November 2021 and invited volunteers to send in written comments as well as survey responses.

The results raise the possibility of a generation gap in Quebec between the older generation, who are informed by a particular set of historical experiences, and the younger people who are the teachers and lawyers of tomorrow. The results of the survey show that:

“We noticed many students shared their deep distress at witnessing the impact of the Law’s passage on their classmates, family members, friends and fellow students,” said Elizabeth Elbourne, an Associate Professor in the Department of History and Classical Studies at McGill co-author of the recently-published study.  “A number of students in Education left comments indicating that they were unwilling to teach in Quebec because of Law 21, despite not being directly personally affected.”

“One of our aims was to gather information about the potential impact of Law 21 on the availability of future professionals, particularly educators, in light of the teacher shortage in Quebec,” said Kimberley Manning, an Associate Professor of Political Science at Concordia.

Of the 629 respondents who completed the survey, just under half were from English-language institutions. Close to 42% were either attending or had graduated from French-language institutions. 8% came from a bilingual institution, the McGill Faculty of Law.  Most were from universities or CEGEPs in Montreal (McGill, Université de Montréal, Concordia and UQÀM). To find participants, researchers contacted student organizations, campus religious groups, and other such groups in Quebec to disseminate the survey to their members.

Students who completed the survey expressed doubts about the likelihood of getting a job in Quebec, with 44.4% saying the law would limit job prospects. The percentage of students who wear a religious symbol who believe their job prospects will be curtailed is even higher, coming in at 70.6%. In addition, 26% of students who wear a religious symbol and had been planning to study education or law have since decided to change career paths.

Of the 84 respondents who identified as women who wear a head covering as a religious symbol (among the group with the highest response rate), 76% reported experiencing discrimination since the law was passed. This included verbal harassment in the street, comments about hijabs being illegal, and conflict in schools. Jewish students also reported experiencing increased instances of anti-Semitism. Of the total number of respondents who indicated that they wore a religious symbol of some kind, 56.5% said they experienced discrimination following the Law’s adoption.

Professors Elbourne and Manning acknowledged the survey’s limitations, citing the small sample size and voluntary nature of responses. Written responses also underscored ambiguity over what counts as a religious symbol and diverse views over what it means to wear one. But the researchers add that while the survey cannot be seen as wholly representative of all Quebec students in education and law programs, the preliminary data and some of the findings are nonetheless consistent with other recent research and polling. They hope their work will encourage more investigation of on-the-ground impacts of Law 21 of which many Quebecers may be unaware.