Air pollution from cars affected by freezing temperatures and snow 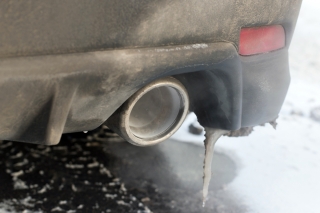 With spring finally here and warmer temperatures just around the corner, snow will slowly melt away, releasing us from the clutches of winter. However, that’s not the only thing that the melting snow will release. Researchers from McGill University and École de technologie supérieure in Montreal have found that urban snow accumulates a toxic cocktail from car emissions - pollutants that are in turn unleashed into the environment as the weather warms up.

“We found that snow absorbs certain polycyclic aromatic hydrocarbons which are organic pollutants known to be toxic and carcinogenic,” says Yevgen Nazarenko, a postdoctoral researcher working with Parisa A. Ariya, professor at McGill’s Department of Atmospheric and Oceanic Sciences and Department of Chemistry, and collaborating with Prof. Patrice Seers’ team at École de technologie supérieure.

“Understanding how these pollutants interact with the environment, including snow, is crucial if we are to reduce the hundreds of thousands of premature deaths caused by mild air pollution in North America. Worldwide, air pollution claims as many as 8 million lives,” says Prof. Ariya, senior author of the group’s new study, published in Environmental Pollution.

In some cases, it doesn’t take high-tech equipment to sniff out shifting pollution levels.

“When one goes outdoors in winter, and there is fresh snow, one can sense the air has a different smell—it usually smells ‘crisper’. Once the snow has been on the ground for some time, the effect goes away. When the weather warms up, the air acquires yet another smell. This is what led us to wonder about how exactly snow interacts with air pollutants,” says Nazarenko.

The scientists analyzed how snow takes up pollutants from car emissions by exposing it to engine exhaust in a frozen glass sphere built in the lab. They found that exhaust is affected differently by the cold and snow depending on the type of fuel injection in the engine.

The new study also found that snow takes up airborne particulate matter and alters the concentrations of different nanoparticles, the smallest particles found in air pollution. These tiny particles have been linked to numerous health problems. Unexpectedly, colder temperatures and interaction with snow increased the relative presence of smaller nanoparticles in the polluted air above the snow.

Once in the snowpack, air pollutants may undergo chemical transformations that create additional pollutants with different toxicity and carcinogenicity. Some compounds, including more toxic and carcinogenic chemicals, may volatilize back into the air, while others accumulate in the snow and are released with meltwater.

“These releases could lead to a higher short-term concentration of certain pollutants in the air, soil and surface water bodies where the meltwater runs to,” worries Nazarenko.

Further studies and environmental monitoring could help identify the most harmful pollutants, which ones should be targeted for reduction in gasoline formulations and in optimization of engines and exhaust treatment technologies, the researchers conclude.

Funding for the research was provided by the Natural Sciences and Engineering Research Council of Canada, the Canada Foundation for Innovation, Environment and Climate Change Canada and the Fonds de recherche du Québec - Nature et technologies.

“Role of snow in the fate of gaseous and particulate exhaust pollutants from gasoline-powered vehicles,” by Yevgen Nazarenko et al. in Environmental Pollution, April 2017