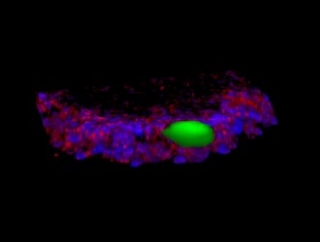 Tissues and organs in the human body are shaped through forces generated by cells, that push and pull, to “sculpt” biological structures. Thanks to a new tool developed at McGill University, scientists will now be able to watch, and map these forces.

Christopher Moraes, an assistant professor in McGill’s Department of Chemical Engineering, and colleagues developed spherical spring-like sensors that distort under mechanical stress within three-dimensional tissues in the lab. The sensors are close to the size of individual cells that make up the tissue. Using imaging techniques and computational methods, the researchers were able to calculate cell-generated forces that cause deformation of the spheres,.

As a first application, the “Microspherical Stress Gauges” were used to study cells that aggregate together to form a 3D cell culture. Prof. Moraes’ team observed the spontaneous formation of a tensional ‘skin’ around this mass of cells, which keep the tissue intact and under mechanical compression. The findings were reported recently in Nature Communications.

“Intuitively, it makes sense that some forces must act to compact the spheroids: any change in shape requires a force to make that happen. However, realizing that relatively small levels of tension in the ’skin’ are sufficient to balance large compressive loads within the tissue was quite surprising, and demonstrated how coordinated activity of relatively weak cells can give rise to large effects”, says Prof. Moraes, who is also the Canada Research Chair in Advanced Cellular Microenvironments.

Being able to visualize forces within biological cultures offers insight into the complex interplay between cells and environmental mechanics, he adds.

“The ability to measure localized forces within multicellular tissues is vital to understand developmental processes and may be of practical utility in developing novel tissue-engineering strategies,” Moraes adds.

Image caption: In this photo, a flexible sphere (green) is deformed by forces generated by cells within a tissue section (cell nuclei are stained in blue and cytoskeletal actin in red).

This work was funded by the Canadian Cancer Society, the Natural Sciences and Engineering Research Council of Canada and the National Institutes of Health.