Measuring protection of the world’s rivers 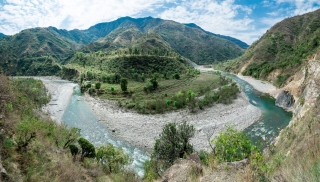 To  what extent are the world’s rivers protected?

In 2010, the Convention on Biological Diversity (CBD), an international treaty for the conservation of biodiversity, set a 17% target for the protection of ‘inland waters,’ including rivers. But there was a problem: there was no good way to measure progress toward that target.

That situation is changing.  A new study, co-authored by McGill University geography professor Bernhard Lehner with freshwater scientists from The Nature Conservancy, World Wildlife Fund, and Griffith University in Australia, uses a high-resolution dataset of the world’s rivers for a first-ever global assessment of the gap between actual protection of the world’s rivers and the CBD target.

The study, published Nov. 9 in Conservation Letters, finds that most river systems around the world fall far short of the 17% target set through the CBD. This is especially true when considering “integrated protection,” including upstream catchment areas. Nearly 70% of river reaches, by length, have no protected areas in their upstream catchments, and only 11% achieve full integrated protection. Levels of protection vary widely by region: South America, dominated by the well-protected Amazon, has average local and integrated levels approaching 30%, whereas both levels are under 10% for the Middle East.

Why is integrated protection important?

“As an illustration, imagine a headwater area where mining activity is discharging toxic pollution into a nearby stream,” explains lead author Robin Abell of the Nature Conservancy. “That pollution finds its way into a downstream river reach that flows through a well-protected reserve.  Can we call that river reach protected if its aquatic species are being poisoned from toxins derived upstream?”

The study outlines a new approach to measuring integrated protection, combining local and upstream protection and using a kind of sliding scale for sufficiency.  Small headwater catchments might be expected to achieve nearly complete protected area coverage, while at the other end of the spectrum the world’s largest rivers with massive upstream catchments are considered to have sufficient upstream protection at lower levels.

“Measuring the protection level of rivers is particularly difficult because of the connectedness of river networks where impacts may be propagated downstream over long distances,” says Prof. Lehner. “But we believe that our new indicator of integrated river protection will help us to illuminate gaps and guide a more strategic design and management of freshwater conservation efforts.”