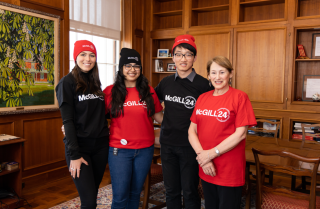 On March 11, the McGill University community rose to the challenge to make a difference on McGill24, the University’s fifth annual day of giving, by contributing $2,956,106 for causes across the University. The final tally, which comes on the strength of 5,379 donations, demonstrated the collective power of bringing people together to give what they can. It represents a new high-water mark for the annual campaign and sets another record for the largest one-day fundraiser of its kind in Canadian university history.

The 24-hour fundraiser played out mainly online through social media platforms like Facebook, Twitter and Instagram, and it has now raised over $9 million in its five-year history. This year’s campaign asked McGill community members to imagine the difference they could make in 24 hours. Using the hashtags #McGill24 and #McGillProud, McGillians around the world built global awareness of the campaign and sparked online conversation to share their enthusiasm.

“We are very grateful for the generosity of our alumni, students, faculty, staff, parents and friends,” said Principal and Vice-Chancellor Suzanne Fortier. “The support that we receive every year during McGill24 makes a real difference to our University and to the next generation of students, while showcasing the deep loyalty and affinity our global community continues to have for McGill.”

While the bulk of the campaign participation occurred online, students, faculty and staff on McGill’s two campuses celebrated throughout the day, many decked out in their McGill24 gear. More than 200 faculty and staff ambassadors devoted their time and energy to sharing the McGill24 spirit and motivating their peers to give.

“This year’s campaign took place as the world faces many challenges and uncertainty,” said Marc Weinstein, Vice-Principal, University Advancement. “But the McGill community rose to the occasion with record-breaking support for our students and faculties. Our donors are helping to ensure that McGill researchers will have the tools they need to make life-changing discoveries and that the next generation of leaders will be even better equipped to tackle the global challenges to come.”

All funds raised during McGill24 will also count towards Made by McGill: the Campaign for Our Third Century, the multi-year, $2-billion fundraising drive that McGill launched last fall to support its bold ambitions as it celebrates its 200th anniversary.

Check out the McGill24 website for more information and statistics about this year’s campaign achievements.