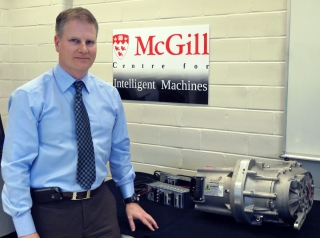 The Honourable Gary Goodyear, Minister of State for Science and Technology, announced at an event held on February 22 that McGill University researchers would receive $4,719,246 from the Natural Sciences and Engineering Research Council (NSERC)’s Automotive Partnership Canada Initiative. The industrial partners involved in the project will provide close an additional $5 million to move the research and development of these new systems forward.

The integrated systems that the McGill researchers and their partners are developing for the electric vehicle market will consist of an electric motor coupled to a controlled multi-speed-ratio gearbox. “What’s really new about what we’re working on here is the optimization of the drivetrain as a fully integrated mechatronic system (this means that the mechanical design, the electronic design and the control system design are all integrated in a single unit). This will maximize its efficiency while reducing its cost, weight and volume,” says Prof. Benoit Boulet of McGill’s Department of Electrical and Computer Engineering and Centre for Intelligent Machines.

McGill researchers and their industrial partners will help reduce the costs of the engines of electric vehicles by developing multi-speed drivetrains that will be both smaller and lighter than the single-speed-ratio drivetrains that are currently in use. Multi-speed transmissions are commonly used in conventional combustion engine vehicles, but they have not yet been used in electric cars.

“As electrical vehicles become more attractive to the typical car buyer, global investments in the electric vehicle technologies are on the rise and are currently somewhere in the billions of dollars,” says Claude Dumas, President of TM4. “The R&D work being carried out in the technology of electrical vehicle powertrains at McGill University will enhance Canadian competitiveness by providing new advanced products to respond to future market needs.”