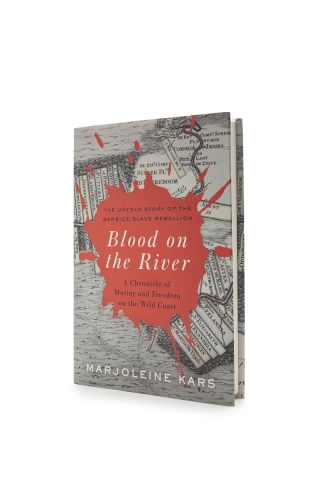 Marjoleine Kars has been named winner of the 2021 Cundill History Prize for Blood on the River: a Chronicle of Mutiny and Freedom on the Wild Coast (The New Press). Kars accessed a previously untapped Dutch archive to reveal the little-known story of a 1763 slave rebellion in Berbice, a Dutch colony in present-day Guyana. Drawing on nearly 900 interrogation transcripts – extremely rare verbatim accounts from suspected rebels, bystanders, and witnesses – she is able to provide a unique day-by-day account of the revolt, in the words of both colonists and, crucially, the slaves themselves.

A professor of history at the University of Maryland, Baltimore County, Kars grew up in the Netherlands and now lives in Washington, D.C. A noted historian of slavery, she is also the author of Breaking Loose Together. The historian receives US$75,000 – the largest reward for a work of non-fiction in English.

The two runners-up are the UK-based Canadian historian Rebecca Clifford, Professor of Transnational and European History at the University of Durham (Survivors: Children’s Lives after the Holocaust, Yale University Press), and the French historian Marie Favereau, Associate Professor of History at Paris Nanterre University (The Horde: How the Mongols Changed the World, Belknap Press of Harvard). They each receive a Recognition of Excellence Award of US$10,000.

Michael Ignatieff, 2021 Chair of the Jury, announced the winner of the leading international history prize, administered by McGill University during a virtual ceremony.

“In our second year running the Cundill History Prize as a fully digital programme, we have reached an even bigger audience with some of the best history writing being produced right now, and today’s winner announcement marks the highpoint of another fantastic season of events,” said Mary Hunter, Interim Dean of the Faculty of Arts at McGill University. “Our 2021 jurors have chosen three extremely relevant finalists and, with Marjoleine Kars’ Blood on the River, we have a winner that brilliantly combines what our prize is seeking: mastery of the historian’s craft, a compelling narrative, and a fresh perspective on a topic that couldn’t be more relevant today.”

The ceremony was hosted by Nahlah Ayed, presenter of CBC Ideas, from the Montreal Museum of Fine Arts, the traditional venue of the gala. It was broadcast live in partnership with History Hit, whose presenter Dan Snow conducted live interviews with the finalists. The event concluded the Cundill History Prize Festival, a 2-day programme of digital events that delivered the prize to its global audience. It can now be re-watched here.

Camilla Townsend kicked off the Cundill History Prize Festival on Wednesday (December 1), delivering the 2021 Cundill Lecture on “Thinking About the Aztecs”. The event was brought to an international audience in partnership with HistoryExtra. Later that day, the Cundill Forum, in partnership with CBC Ideas, saw a conversation between finalists Rebecca Clifford, Marie Favereau and Marjoleine Kars under the headline “Why Do We Rewrite History?”.

Endowed by F. Peter Cundill, a distinguished McGill alumnus, philanthropist, and renowned global investor, the Cundill History Prize is open to books in English, as well as works translated into English, from anywhere in the world, regardless of the author’s nationality or place of residence.

For further information and to join the conversation please visit: www.cundillprize.com

About McGill University | Celebrating 200 years of discovery and learning, McGill University ranks as one of the top universities in Canada and the world. McGill’s mission is to create and share knowledge by offering the best possible education, by carrying out research and scholarly activities judged to be excellent by the highest international standards, and by providing service to society. These activities span three campuses, 11 faculties, 13 professional schools, and some 300 programs of study. Every year, McGill welcomes over 40,000 students, attracting more than 30% from 150-plus countries, and has the highest percentage of PhD students of any Canadian research university. Nearly 60% of its student population speaks French. www.mcgill.ca

About F. Peter Cundill | F. Peter Cundill (1938-2011), a distinguished alumnus of McGill University, was a philanthropist, sportsman, diarist, and renowned global investor. A voracious reader and inveterate traveller, F. Peter Cundill had an abiding passion for history: he believed that it was possible to comprehend the present and arrive at a measured perspective about the future only by first understanding the past. This led him to found the Cundill History Prize. The Peter Cundill Foundation was established in 2012 to honour his legacy through an emphasis on improving the lives of young people. www.thepetercundillfoundation.com