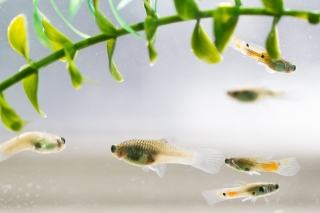 Male guppies exposed to predators in the wild or in captivity have heavier brains than those living in relatively predator-free conditions, according to new research published in the journal Functional Ecology.

Behavioural ecologists at McGill University in Montreal sampled guppies from two rivers in northern Trinidad. In each river, guppies live both above a waterfall, a location that only guppies and a few other small species of fish have managed to colonize, and below the fall, where many predators including pike cichlids live.

“Guppies offer an excellent model for evolutionary research because they have colonized multiple independent rivers in Trinidad where they are exposed to a variety of different conditions,” says lead author Adam Reddon. “We were particularly interested in finding out how the brains of these widely-distributed fish have evolved for dealing with the challenges of living under predation threat.” Reddon, who is now at Liverpool John Moores University in the UK, worked on the project as a postdoctoral fellow in the lab of McGill Biology professor Simon Reader.

Lab experiment
To test the origins of these findings, the ecologists conducted a laboratory experiment in which they exposed young guppies to cues of predation risk

“The brain is a highly malleable organ and experiences early in life can shape how it develops. We wanted to see if the predation effect we detected in male guppies in the wild could be due to experiences in their early life stages,” says co-author Laura Chouinard-Thuly, a PhD candidate in Biology at McGill.

Again, the researchers found that males exposed to predator cues during development had 21% heavier brains than the control group. They found no evidence that the exposure to predation cues influenced the relative brain mass of female guppies.

Possible advantages
Males are more brightly coloured and attractive to predators. The results suggest that a larger brain for their body size is advantageous under predation threat, perhaps allowing the fish to detect, learn about or react to predators better.

Brains can use a lot of energy and are generally only as large as they need to be for animal survival and reproduction. Female guppies are 2-10 times the size of males and tend to live longer. They play a slow and steady strategy to reproduction and so may consistently benefit from paying the high costs of building and maintaining larger brain tissue, whereas male guppies may only benefit under high predation risk.

“Female guppies have larger brains for their body size than do males; our results suggest that males only grow larger brains when they will benefit,” Reader says. “Obviously, the next steps are to determine which parts of the brain are expanding, and how this impacts behaviour”.

PHOTO: Wild-type guppies in an aquarium with two females to the left and three males (note their smaller body size and orange-colour patches) to the right. CREDIT: Laura Chouinard-Thuly/McGill University

Funding for the research was provided by the Natural Sciences and Engineering Research Council of Canada and the Canada Foundation for Innovation.