The making of Antarctica 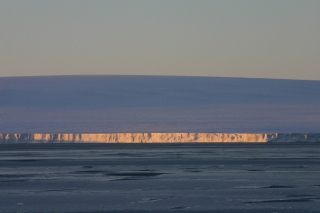 One of the big mysteries in the scientific world is how the ice sheets of Antarctica formed so rapidly about 34 million years ago, at the boundary between the Eocene and Oligocene epochs.

There are 2 competing theories:

The first explanation is based on global climate change: Scientists have shown that atmospheric carbon dioxide levels declined steadily since the beginning of the Cenozoic Era, 66 million years ago. Once CO2 dropped below a critical threshold, cooler global temperatures allowed the ice sheets of Antarctica to form.

The second theory focuses on dramatic changes in the patterns of ocean circulation. The theory is that when the Drake Passage (which lies between the southern tip of South America and Antarctica) deepened dramatically about 35 million years ago, it triggered a complete reorganization in ocean circulation. The argument is that the increased separation of the Antarctic land mass from South America led to the creation of the powerful Antarctic Circumpolar Current which acted as a kind of water barrier and effectively blocked the warmer, less salty waters from the North Atlantic and Central Pacific from moving southwards towards the Antarctic land mass leading to the isolation of the Antarctic land mass and lowered temperatures which allowed the ice sheets to form.

No one has thought to link these two competing explanations before

A group of researchers, led by scientists in McGill University’s Dept. of Earth and Planetary Sciences now suggest that the best way to understand the creation of this phenomenon is, in fact, by linking the two explanations.

In a paper published on the subject in Nature Geoscience earlier this week they argue that:

Galen Halverson teaches in the Dept. of Earth and Atmospheric Science at McGill and is one of the authors of the paper. He believes that no one has thought of combining the two theories before because it’s not an intuitive idea to look at how the effects of changing patterns of ocean circulation, which occur on time scales of thousands of years, would effect global silicate weathering, which in turn controls global climate on time scales of 100s of thousands of years.

“It’s an interesting lesson for us when it comes to climate change,” says Halverson, “because what we get is a thumbnail shift between two stable climatic states in Antarctica – from no glaciers to glaciers. And what we see is both how complex climate changes can be and how profound an effect changing patterns of ocean circulation can have on global climate states, if looked at on a geological time scale.”

The research was funded by the Canadian Foundation for Innovation (CFI), the Canadian Institute for Advanced Research (CIFAR), and the Natural Sciences and Engineering Research Council of Canada (NSERC).