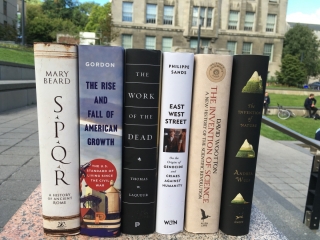 The six books vying for the 2016 Cundill Prize in Historical Literature were announced today by Antonia Maioni, Dean of McGill University’s Faculty of Arts. “This year’s long list continues the Cundill Prize tradition of identifying outstanding works of historical writing that combine scholarship and wide appeal,” said Maioni, who serves as the Chair of the Cundill Prize. Now in its ninth year, the Cundill Prize is the world’s most lucrative international award for a non-fiction book, featuring a grand prize of $75,000 (US) and two Recognition of Excellence prizes of $10,000 (US) each.

The six long-listed titles are:

About the Prize: The Cundill Prize is the world’s most important international prize for non-fiction historical literature. It was established in 2008 by McGill alumnus F. Peter Cundill, who passed away in January 2011. The prize is administered by McGill University’s Dean of Arts, with assistance from the McGill Institute for the Study of Canada (MISC), and is awarded annually to an individual who has published a book that has made a profound literary, social, and academic impact in the area of history.

For more information on the Cundill Prize: www.cundillprize.com