Is it possible to reduce political polarization?

Turns out that, at least temporarily, you can for 94% of people. Political surveys capturing public attitudes are easily manipulated 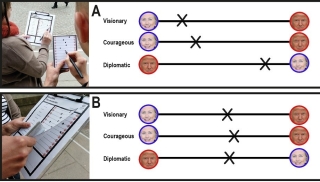 In the run-up to the 2016 U.S. presidential election, an unusual experiment suggested that it might be possible to influence American voters to adopt less polarized positions.

Posing as political researchers, a research team from McGill and Lund Universities approached 136 voters at the first Donald Trump and Hilary Clinton presidential debate in New York. Participants were asked to compare Trump and Clinton on various leadership traits (such as courage, vision, and analytic skills) by putting an X on a sliding scale.

Using a simple magic trick, the researchers then covertly manipulated the results (by substituting one completed survey sheet for another) so that most of the survey answers appeared moderate, closer to the midpoint between Trump and Clinton. They then presented these more moderate responses to the participants as being their own answers.

Surprisingly, 94 % of the respondents accepted the manipulated responses as being their own answers and readily justified the moderate views. For example, one participant who initially heavily favoured Trump claimed, “I guess I fall somewhere in the middle — I’d like to think I’m a little moderate. I think at this point it’s important to be open-minded” — even though they had reported more polarized views moments earlier.

“Political surveys try to capture the attitudes of the public, but our study demonstrates that these can be heavily manipulated,” said Jay Olson, co-author on the research paper that was published today in PLOS ONE. “By making people believe that they wrote down different responses moments earlier, we were able to make them endorse and express less polarized political views. These results offer hope in a divided political climate: even polarized people can become — at least momentarily — open to opposing views.”

To read: “Depolarizing American voters: Democrats and Republicans are equally susceptible to false attitude feedback” by Thomas Strandberg et al in PLOS ONE