A ‘hot Jupiter’ with unusual winds 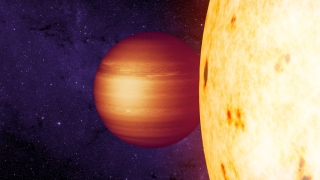 The hottest point on a gaseous planet near a distant star isn’t where astrophysicists expected it to be – a discovery that challenges scientists’ understanding of the many planets of this type found in solar systems outside our own.

Unlike our familiar planet Jupiter, so-called hot Jupiters circle astonishingly close to their host star -- so close that it typically takes fewer than three days to complete an orbit.  And one hemisphere of these planets always faces its host star, while the other faces permanently out into the dark.

Not surprisingly, the “day” side of the planets gets vastly hotter than the night side, and the hottest point of all tends to be the spot closest to the star. Astrophysicists theorize and observe that these planets also experience strong winds blowing eastward near their equators, which can sometimes displace the hot spot toward the east.

In the mysterious case of exoplanet CoRoT-2b, however, the hot spot turns out to lie in the opposite direction: west of center.  A research team led by astronomers at McGill University’s McGill Space Institute (MSI) and the Institute for research on exoplanets (iREx) in Montreal made the discovery using NASA’s Spitzer Space Telescope. Their findings are reported Jan. 22 in the journal Nature Astronomy.

“We’ve previously studied nine other hot Jupiter, giant planets orbiting super close to their star. In every case, they have had winds blowing to the east, as theory would predict,” says McGill astronomer Nicolas Cowan, a co-author on the study and researcher at MSI and iREx. “But now, nature has thrown us a curveball. On this planet, the wind blows the wrong way. Since it’s often the exceptions that prove the rule, we are hoping that studying this planet will help us understand what makes hot Jupiters tick."

CoRoT-2b, discovered a decade ago by a French-led space observatory mission, is 930 light years from Earth. While many other hot Jupiters have been detected in recent years, CoRoT-2b has continued to intrigue astronomers because of two factors: its inflated size and the puzzling spectrum of light emissions from its surface.

“Both of these factors suggest there is something unusual happening in the atmosphere of this hot Jupiter,” says Lisa Dang, a McGill PhD student and lead author of the new study. By using Spitzer's Infrared Array Camera to observe the planet while it completed an orbit around its host star, the researchers were able to map the planet’s surface brightness for the first time, revealing the westward hot spot.

The researchers offer three possible explanations for the unexpected discovery – each of which raises new questions:

"We’ll need better data to shed light on the questions raised by our finding,” Dang says. “Fortunately, the James Webb Space Telescope, scheduled to launch next year, should be capable of tackling this problem. Armed with a mirror that has 100 times the collecting power of Spitzer’s, it should provide us with exquisite data like never before."

Funding for the research was provided in part by the Natural Sciences and Engineering Research Council of Canada and the California Institute of Technology’s Infrared Processing and Analysis Center.