Happiness really does come for free 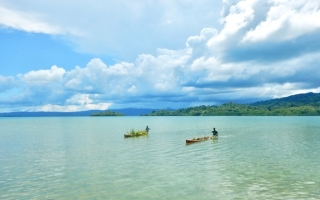 Economic growth is often prescribed as a sure way of increasing the well-being of people in low-income countries, but a study led by McGill and the Institute of Environmental Sciences and Technologies at the Universitat Autònoma de Barcelona (ICTA-UAB) suggests that there may be good reason to question this assumption. The researchers set out to find out how people rate their subjective well-being in societies where money plays a minimal role, and which are not usually included in global happiness surveys. They found that the majority of people reported remarkably high levels of happiness. This was especially true in the communities with the lowest levels of monetization, where citizens reported a degree of happiness comparable to that found in Scandinavian countries which typically rate highest in the world. The results suggest that high levels of subjective well-being can be achieved with minimal monetization, challenging the perception that economic growth will automatically raise life satisfaction among low-income populations.

To explore how monetization affects people’s sense of well-being, the researchers spent time in several small fishing communities, with varying degrees of monetization, in the Solomon Islands and Bangladesh, two very low-income countries. Over a period of a few months, with the help of local translators, they interviewed citizens in both rural and urban areas a number of times. The interviews, which took place both in person and through phone calls at unexpected moments, were designed to elicit information about what constituted happiness for the study subjects, as well as to get a sense of their passing moods, their lifestyle, fishing activities, household income, and level of market integration.

In all, the researchers interviewed 678 people, ranging in age between their mid-twenties and early fifties, with an average age of about 37. Almost 85 % of the study participants were male. The disproportionate number of men in the study was due to the fact that cultural norms in Bangladesh made it difficult to interview women. In the Solomon Islands, responses to the study questions from men and women were not significantly different. However, this is not necessarily applicable to the situation in Bangladesh, as men and women's social realities and lifestyles differ so much. Further research will need to address whether gender-related societal norms impact the association found in this study.

Early stages of monetization may be detrimental to happiness

The researchers found that in the communities where money was in greater use, such as in urban Bangladesh, residents reported lower levels of happiness.

“Our study hints at possible ways of achieving happiness that are unrelated to high incomes and material wealth,” says Eric Galbraith, a professor in McGill’s Department of Earth and Planetary Sciences and the senior author on the study, which was recently published in PLOS One. “This is important, because if we replicate these results elsewhere and can pinpoint the factors that contribute to subjective well-being, it may help us circumvent some of the environmental costs associated with achieving social well-being in the least developed nations.”

“In less monetized sites, we found that people reported a greater proportion of time spent with family and contact with nature as being responsible for making them happy,” explains Sara Miñarro, the lead author on the study who is a Postdoctoral Research Fellow at (ICTA-UAB). “But with increasing monetization, we found that the social and economic factors commonly recognized in industrialized countries played a bigger role. Overall, our findings suggest that monetization, especially in its early stages, may actually be detrimental to happiness.”

Interestingly, while other research has found that technology and access to information from faraway cultures with different lifestyles may affect people’s sense of their own well-being by offering standards to which people compare their own lives, this did not appear to be the case in these communities.

“This work adds to a growing realization that important supports for happiness are not in principle related to economic output,” adds Chris Barrington-Leigh, a professor in McGill’s Bieler School of the Environment. “When people are comfortable, safe, and free to enjoy life within a strong community, they are happy – regardless of whether or not they are making any money.”