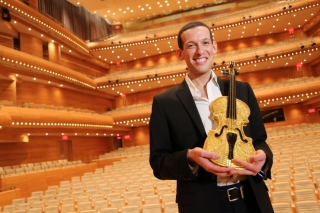 “They’re my good luck charms,” says the 25-year-old violinist with evident emotion. “They inspire me to do my best to express what I feel inside. Without my family, I would never have become the musician I am today.”

Rodrigues, who is originally from Nîmes, France, is the 2012 winner of the Golden Violin Award, presented annually by the Schulich School of Music at McGill University. The award includes a $20,000 scholarship and is the most prestigious prize given to a music student by a higher learning institution in Canada. The prize will be awarded this evening at a concert given by the McGill Symphony Orchestra, in the presence of Michel Clercx, Deputy Consul General of France.

Rodrigues, who is enrolled in the Graduate Diploma in Professional Performance (violin), is the first international student to win the Golden Violin Award, which has been presented every year since 2006 to a McGill string player who is close to completing studies and shows exceptional promise. He plans to use part of the prize to buy the violin he’s been playing since last year, which was made by a Montreal luthier.

“I am very moved to be receiving this award. It makes me immensely happy,” said the young musician, dedicating the honour to his grandmother, who died earlier this year after a long battle with Alzheimer’s disease.

Born to musician parents, Rodrigues began to study violin, piano and voice at a very young age, garnering top honours in his studies. At 18, he chose to concentrate on the violin, which reflects his “Latin” temperament, he says. He studied with Mauricio Fuks – a former McGill professor – at the Jacobs School of Music at Indiana University in Bloomington, and fell in love with Quebec through summer studies at the Orford Arts Centre. He has just been hired by the Academy of the Deutsches Symphonie-Orchester Berlin.

“Baptiste is dedicated, sincere and dynamic, which is reflected in the way he plays,” says Denise Lupien, his violin teacher at the Schulich School of Music. “Musically, he’s effervescent and highly imaginative. His interpretation is always spontaneous. I think he has a real talent for touching people’s soul.”

Baptiste Rodrigues will give a recital on Sunday, February 17, 2013, at 4 p.m. at McGill’s Tanna Schulich Hall. The program will include works by Brahms, Franck, Ravel and... a few French songs!

The Golden Violin was given to McGill by businessman and philanthropist Seymour Schulich in 2006, a year after he donated $20 million to McGill’s School of Music, which was renamed in his honour shortly thereafter. Made of pewter and gold plate, the Golden Violin remains on permanent display in the Marvin Duchow Music Library at McGill. The recipients, chosen through a rigorous selection process, receive a miniature likeness of the Golden Violin in the form of a 14-carat lapel pin. The six previous winners are violinists Emmanuel Vukovich, Aaron Schwebel and Ewald Cheung, violists Lambert Chen and Isaac Chalk, and cellist Chloé Dominguez.

About The Schulich School of Music
Founded in 1904, the Schulich School of Music of McGill University embodies the highest international standards of excellence in professional training and research. The School is known for its performance programs in orchestral instruments, voice, jazz, early music and contemporary music. Its status as a leader in sound recording and music technology provides unique possibilities for collaboration with the larger musical community. Recognized today as one of the major music schools in North America, Schulich has more than 850 students, from Quebec, Canada and abroad. They are drawn by the reputation of Schulich's 240 teachers and professors, its annual slate of some 700 concerts and events, and its research programs in the humanities and in the science and technology of music.