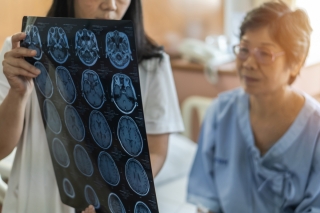 New insight into a gene that controls energy production in cancer stem cells could help in the search for a more effective treatment for glioblastoma. A McGill-led study published in Nature Communications reveals that suppressing the OSMR gene can improve the effectiveness of radiation therapy.

This approach, led by the laboratory of Arezu Jahani-Asl, Assistant Professor of Medicine at McGill University, was successful in preclinical mouse models where the deletion of the OSMR gene resulted in a significant improvement of tumour response to therapy and expanded lifespan.

Glioblastoma is the most common and aggressive cancerous brain tumour in adults due to its resistance to therapy. Treatment usually involves surgery, followed by chemotherapy and radiation therapy. Despite these intensive efforts, in most cases tumour cells regrow after treatment and the cancer recurs.

Glioblastoma tumours contain rare cancer stem cells responsible for therapeutic resistance and tumour regrowth. In the study, researchers uncover the unique role OSMR plays in fortifying cancer stem cells’ resistance to therapy by strengthening mitochondria, the powerhouse of cell energy production. It makes the long journey to the mitochondria and interacts with energy-producing machineries to force them to generate more energy for cancer cells.

“To improve patient response to glioblastoma treatment, we must find new vulnerabilities in cancer stem cells and overcome their resistance to therapy. By suppressing OSMR, we were able to halt energy production in cancer stem cells, essentially starving them to death,” says Jahani-Asl.

The study provides evidence that targeting OSMR gene, in combination with radiation therapy, can pave the way for future clinical trials that better treat glioblastoma tumours. The next step is to leverage these tools into a clinical trial, the researchers say.