Freshwater ecosystems at risk due to glyphosate use 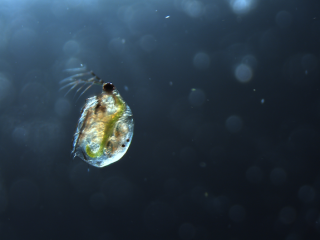 One of the few species that was found to be resistant to severe glyphosate contamination was Scapholeberis mucronata, a freshwater zooplankter commonly found in Québec and elsewhere in North America. CREDIT: Marie-Pier Hébert

A series of recent research papers from a McGill-led team has found that the herbicide glyphosate—commonly sold under the label Roundup—can alter the structure of natural freshwater bacterial and zooplankton communities. Notably, the researchers found that for zooplankton, aquatic concentrations of 0.1 mg/L glyphosate were sufficient to cause diversity loss.

“Because plankton form the foundation of the food chain in freshwater ecosystems, it is very important to understand how plankton communities respond to widely used pesticides,” said Jesse Shapiro, an Associate Professor in McGill’s Department of Microbiology & Immunology. “Our research shows that the structure of these communities can be impaired under currently acceptable North American water quality guidelines.”

Toxicity studies often rely on laboratory tests with a single species, ignoring the possible influence of many environmental factors and species interactions on community responses to pollutants. In these studies, the researchers used a large-scale array of 1,000-L experimental ponds filled with lake water to gain a better understanding of the effects of the chemicals on naturally-occurring planktonic organisms. They recorded bacterial, algal and zooplankton community responses to the individual and joint presence of three chemicals commonly used by farmers around the world: the herbicide glyphosate (Roundup—used to control weeds notably in corn and soy fields), the neonicotinoid insecticide imidacloprid (used to control piercing-sucking insects), and nutrient fertilizers.

We found that when we applied the pesticides and fertilizers alone and in combination, at a wide range of concentrations, that glyphosate was the most influential driver of community structure among the agrochemicals,” said Andrew Gonzalez, a Professor in McGill’s Biology Department and the Liber Ero Chair in Biodiversity Conservation.

Interestingly, glyphosate contamination affected freshwater bacteria and zooplankton differently. The bacterial communities were initially affected by high concentrations of glyphosate, but they could recover from this stress within days.

“We believe that they were able to recover because they came from a pristine lake and the initial community was diverse enough to “buffer” such a large impact,” said Naila Barbosa da Costa, a PhD student in Biology at l’Université de Montréal and the first author on the recent paper on bacterioplankton in Molecular Ecology. “We do not know if bacterial communities from less diverse ecosystems would be able to cope with a strong contamination the same way.”

On first exposure to glyphosate, zooplankton community abundance and diversity declined rapidly. Thereafter, the total abundance of zooplankton recovered within less than 3 weeks, but the number of species (and hence, diversity) remained low, especially in highly contaminated ponds. This is because the application of glyphosate eliminated sensitive species, allowing the few tolerant species to take over and proliferate.

“Long-lasting species loss and compositional shifts have clear implications for the functioning and stability of freshwater ecosystems, even when zooplankton abundance appears unaffected,” said Marie-Pier Hébert, a PhD candidate in McGill’s Department of Biology and the first author on the paper published recently in Ecological Applications. “How the effects of glyphosate cascade through freshwater ecosystems to affect their health in the long-term deserves much more study.”