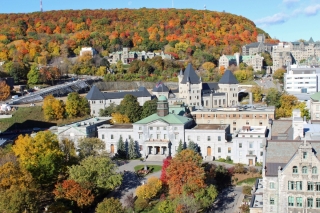 McGill University’s Indigenous students can now rely on dedicated financial support thanks to a new partnership with Indspire, an Indigenous national charity that invests in the education of Indigenous peoples. Indspire will manage the awarding process through its Building Brighter Futures: Bursaries, Scholarships and Awards program to secure matching funds from the Government of Canada. This nearly doubles McGill’s $500,000 investment towards its prospective and enrolled Indigenous students over the next two years.

In its 2015 final report, the Truth and Reconciliation Commission of Canada (TRC) called on all Canadian institutions to acknowledge and reduce barriers to education for Indigenous people. In response to this call, Provost Christopher Manfredi struck a Task Force on Indigenous Studies and Education. One of the concrete recommendations was that McGill provide a robust funding model for Indigenous students. This pledge stems from McGill’s recognition that access to education is a crucial step towards reconciliation.

As a result, the Indigenous Student Financial Assistance Pilot was created with the aim of increasing recruitment and retention of Indigenous students, starting this Fall semester. Christopher Manfredi, McGill Provost and Vice-Principal (Academic), emphasized that:

“If we want to break down the barriers that Indigenous People face in their access to education, we need to work on all aspects of their journey, and certainly funding is an important enabler for this journey.”

“With this investment in Indigenous education, McGill is taking a crucial step towards reconciliation. With this funding, we will be able to provide much needed support to Indigenous students, enabling them to reach their highest potential through post-secondary education.” Roberta Jamieson, President & CEO of Indspire. “

Two types of financial assistance will be made available via Indspire:

Additionally, the University will manage in-house the Provost’s Indigenous Achievement Award, a $5000 renewable Admissions award given to Indigenous students with exceptional high school or CEGEP grades.

The University is committed to recruiting more indigenous students to study at McGill and breaking down the financial barriers they face in pursuing higher education. While recognizing that there is much work to be done, McGill’s response demonstrates its commitment to fostering an equitable and inclusive campus, with strong First Nations, Métis and Inuit representation within the students welcomed from across Canada and around the world.

Along with other members of Universities Canada (UC), McGill has committed to making Indigenous education a priority. As reconciliation efforts are a shared responsibility, many units across the university collaborated on making this project come alive. To this end, the Financial Assistance pilot project is only one of many initiatives to be rolled out in the near future.

About McGill
Founded in Montreal, Quebec, in 1821, McGill is a leading Canadian post-secondary institution. It has two campuses, 10 faculties, 12 professional schools, 300 programs of study and almost 41,000 students, including more than 9,700 graduate students. McGill attracts students from over 150 countries around the world, its 12,000 international students making up 30% per cent of the student body. Over half of McGill students claim a first language other than English, including approximately 20% of our students who say French is their mother tongue.

About Indspire
Indspire is an Indigenous national charity that invests in the education of Indigenous people for the long-term benefit of these individuals, their families and communities, and Canada. With the support of its funding partners, Indspire disburses financial awards, delivers programs, and shares resources with the goal of closing the gap of increasing graduation rates for Indigenous students. Through the K-12 Institute, it provides resources to educators, communities, and other stakeholders who are committed to improving kindergarten to grade 12 outcomes for Indigenous youth. In 2017-18, Indspire provided $14.2 million through over 4,900 bursaries and scholarships to First Nations, Inuit, and Métis students.