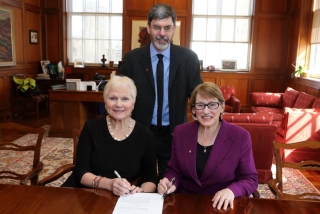 McGill alumna Elizabeth A. Wirth, BA’64, has made a landmark gift of $7.5 million to enhance student-related programs at the Schulich School of Music of McGill University. In recognition of her exceptional generosity for this and previous gifts, McGill is naming the New Music Building on Sherbrooke St. in her honour.

The announcements of the gift and the renaming of the building were made earlier this evening at a special event at McGill celebrating philanthropy and showcasing the impact that private support is having on the Schulich School of Music and its students.

The event was attended by Hélène David, Minister of Culture and Communications and the Minister responsible for the Protection and Promotion of the French Language, who took advantage of the opportunity to reiterate the importance of cultural philanthropy in Quebec.

“Culture is at the heart of the Quebec identity. It is essential that, in addition to government support, we have the backing of our community, so that we can preserve and pass on this heritage. The donations to the Schulich School of Music, including this one to the Elizabeth Wirth Music Pavilion, are perfect examples of the type of patronage we hope to encourage with a view to advancing arts and culture in Quebec,” Ms. David explained.

“I am grateful to Elizabeth Wirth for her years of impassioned and generous support to the Schulich School of Music of McGill University. These extraordinary gifts reflect her profound dedication to McGill and to its talented students,” said McGill’s Principal and Vice-Chancellor, Suzanne Fortier. “Mrs. Wirth strongly believes in the importance of music to the cultural life of Montreal and Quebec. Her investment today will enhance and enrich not just McGill University but the entire community for years to come.”

Wirth, led by her Viennese grandmothers, became an opera fan early in her youth, calling herself a teenage “opera groupie” who avidly read her subscriptions to the Metropolitan Opera News and started attending performances at a young age. She has been an active supporter and volunteer with the Schulich School of Music for years, providing not just financial support but valuable counsel on strategic, operational and financial issues as a member and Chair of the Faculty’s Advisory Board.

This significant donation comes at an exciting moment for McGill as it prepares to launch a series of events to mark the 10th anniversary of the re-birth of its Faculty of Music as the Schulich School of Music.

“We are so fortunate to benefit from the unwavering support of generous donors like Elizabeth Wirth. Thanks to them the Schulich School is able to offer its students top-notch teaching and research programs, and state-of-the-art equipment and facilities,” said Sean Ferguson, Dean of the Schulich School of Music. “It is through their generosity that we are able to attract students to Montreal from all over the world and offer them an unparalleled music education.”

“The Schulich School of Music is a worldwide leader in music training and research, and our students are the best – amazingly talented yet unpretentious, hardworking and modest” said Wirth. “To keep our place as one of the top music schools in the world, we continually work to create an atmosphere that attracts not only exceptional students, but also outstanding professors and teachers from all over the world, whose presence in turn encourages eager young musicians to attend McGill.”

As a philanthropist, Wirth has supported and championed an array of initiatives, including scholarships and fellowships, and the Schulich School of Music’s renowned opera program, which benefits from the exceptional rehearsal and performance environment of the Wirth Opera Studio, renovated several years ago thanks to a gift from Wirth and her late father, Manfred.

In 2013, Wirth spearheaded a highly-successful $1.3-million fundraising campaign to transform the facilities adjacent to the School’s state-of-the-art Music Multimedia Room, allowing students to produce outstanding recordings and conduct cutting-edge research into sound. She has since matched contributions from more than 50 donors.

McGill University is Canada’s top institution of higher learning and one of the leading universities in the world. With students coming to McGill from some 150 countries, its student body is the most internationally diverse of any research-intensive university in the country. McGill was founded in 1821 thanks to a generous bequest by James McGill, and since then has grown from a small college to a bustling university with two campuses. Its 11 faculties and 11 professional schools offer more than 300 programs of study to some 39,500 graduate, undergraduate and continuing studies students. McGill ranks 1st in Canada among medical-doctoral universities (Macleans) and 21st in the world (QS World University Rankings). The University is proud to be named one of Montreal’s Top Employers.

About the Schulich School of Music

Founded in 1904, the Schulich School of Music of McGill University embodies the highest international standards of excellence in professional training and research. The School is renowned for its programs in orchestra, opera, jazz, early music and contemporary music. Its status as a leader in sound recording and music technology provides unique possibilities for collaboration with the larger musical community.  Recognized as one of the major music schools in North America, the Schulich School of Music has more than 850 students, 240 faculty members and top programs in research and technology.  It hosts some 700 concerts and events each year.