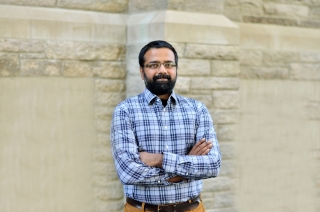 An Assistant Professor in the Department of Physiology at McGill University’s Faculty of Medicine and a member of the Cell Information Systems group at McGill’s Life Sciences Complex, Dr. Arjun Krishnaswamy was recently included among the 126 outstanding early-career researchers selected for 2019 Sloan Research Fellowships. Yang Chai, formerly an Assistant Professor and William Dawson Scholar in the School of Computer Science—now at Yale University—was also the recipient of a Sloan Fellowship for his work on algorithmic mechanism design and tools.

The fellowships, which have been awarded to deserving researchers from the United States and Canada annually since 1955 by the Alfred P. Sloan Foundation, honour early-career scholars from eight scientific and technical fields whose achievements mark them among the most promising researchers in their fields. Candidates are nominated by their fellow scientists and winning fellows are selected by independent panels of senior scholars on the basis of a candidate’s research accomplishments, creativity, and potential to become a leader in his or her field. Winners receive a two-year, $70,000 fellowship to further their research.

“Sloan Research Fellows comprise an amazing list of scientists and it is an honour to be selected to join their ranks,” says Dr. Krishnaswamy of his selection for this prestigious award in the neuroscience category. “The fellowship will help me establish my lab in the Department of Physiology at McGill and help fund our studies on the mechanisms that assemble functional neural circuitry.”

“Dr. Krishnaswamy brings tremendous creativity and productivity to our Department,” notes Dr. John White, Chair of the Department of Physiology at McGill. “His breadth of technical expertise is impressive, with a demonstrated track record of developing sophisticated experimental protocols, and, when necessary, custom-built hardware.”

Dr. Krishnaswamy’s research focuses on issues that are among the most challenging in neuroscience: how do neurons form specific circuit-like patterns of connections, and how do these wiring patterns give us the ability to sense, move and think? In his lab, Dr. Krishnaswamy uses an arsenal of genetic, electrophysiological, optical, and behavioural approaches to attempt to better understand how neural circuits become wired. Resolving these issues will provide important insights into the functioning of the brain and, equally importantly, into neurological diseases that arise when circuits form abnormally.

As a postdoctoral fellow at Harvard University, Dr. Krishnaswamy devised a new two-photon based optogenetic approach to map connections within neural circuits of the retina. Armed with these wiring patterns, he then uncovered genes that specify wiring patterns within two motion detecting visual circuits. At McGill, his lab is extending this approach in the retina and its immediate targets in the brain to deepen our understanding of genes, wiring patterns, and circuit function. Ultimately, his goal is to leverage this information to understand the relationship between miswired circuitry and mental illness. For the full list of 2019 Sloan Research Fellows: https://sloan.org/fellowships/2019-Fellows