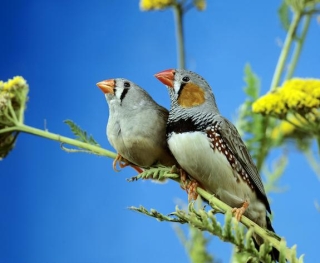 In humans, the dopamine system has been tied to rewards and pleasurable sensations. As well as to memory and learning. A recent study from McGill University, published in Current Biology, suggests that dopamine may also play a key role in shaping what songs female songbirds enjoy, which may ultimately affect mating as females choose (and then remember) their mates based on the songs they prefer.

Zebra finches are monogamous songbirds and form pairs that last throughout their lifetimes. The male sings and does a dance, and this can then lead to copulation. Thus, for males, success in mating depends on how an individual female songbird receives and reacts to the songs they sing.

Some songs sound better than others

“But female songbirds are very selective about which songs they like,” explains Sarah Woolley, the lead researcher on the study and an associate professor in McGill’s Biology Department. “And, while different birds prefer different songs, each female remains consistent in her preferences over time.”

The researchers found that many parts of the brain that produce dopamine connect to the auditory cortex, and cells in some of those regions showed more activity when female songbirds listened to the songs they preferred. Using an experiment where the songbirds learnt to pull strings to hear the songs they preferred, the researchers also discovered that by administering dopamine to the female songbirds, they were able to manipulate and cause lasting changes in their song preferences.

It is a finding that advances current scientific thought in the area. Earlier research in the field had suggested that the auditory cortex was important for recognizing and discriminating between songs, while other “reward” centers were important for determining how much females liked the song they were listening to.

“I find it fascinating that the way that each of us perceive communication signals, like speech, or other sounds, like music, is not static,” adds Woolley. “Rather, our perceptions of these sounds depend on experiences that we have throughout our lives. Studying how experiences can gain access to and shape the neural circuits for perception can not only expand our general understanding of how we process and perceive sounds, it can also help us to understand why we like or enjoy particular sounds.”