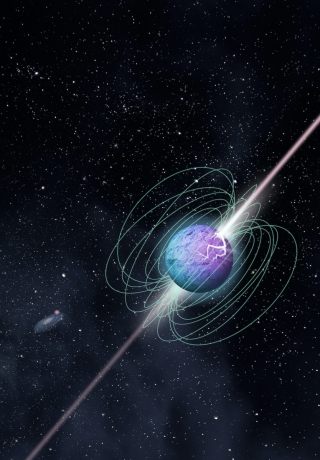 New data from a Canadian-led team of astronomers, including researchers from the McGill Space Institute and McGill University Department of Physics, strongly suggest that magnetars - a type of neutron star believed to have an extremely powerful magnetic field - could be the source of some fast radio bursts (FRBs). Though much research has been done to explain the mysterious phenomenon, their source has thus far remained elusive and the subject of some debate.

First detection of an intense radio burst from a Galactic magnetar

On 28 April 2020, a team of approximately 50 students, postdocs and professors from the Canadian Hydrogen Intensity Mapping Experiment (CHIME) Fast Radio Burst Collaboration detected an unusually intense radio burst emanating from a nearby magnetar located in the Milky Way. In a study published today in Nature, they show that the intensity of the radio burst was three thousand times greater than that of any magnetar measured thus far, lending weight to the theory that magnetars are at the origin of at least some FRBs.

“We calculated that such an intense burst coming from another galaxy would be indistinguishable from some fast radio bursts, so this really gives weight to the theory suggesting that magnetars could be behind at least some FRBs,” said Pragya Chawla, one of the co-authors on the study and a senior PhD student in the Physics Department at McGill.

Competing theories about the origins of FRBs

FRBs were first discovered over a decade ago. Originally thought to be singular events, astronomers have since discovered that some of these high-intensity blasts of radio emissions – more intense than the energy generated by the Sun over millions to billions of years – in fact repeat.

“So far, all of the FRBs that telescopes like CHIME have picked up were in other galaxies, which makes them quite hard to study in great detail,” said Ziggy Pleunis, a senior PhD student in McGill’s Physics department and one of the co-authors of the new study. “Moreover, the magnetar theory was not supported by observations of magnetars in our own galaxy as they were found to be far less intense than the energy released by extragalactic FRBs until now.” Magnetar origin for all FRBs remains to be confirmed

“However, given the large gaps in energetics and activity between the brightest and most active FRB sources and what is observed for magnetars, perhaps younger, more energetic and active magnetars are needed to explain all FRB observations,” added Dr. Paul Scholz from the Dunlap Institute of Astronomy and Astrophysics at the University of Toronto.

Smoking-gun proof of a magnetar origin for some FRBs would come from the simultaneous detection of an extragalactic radio burst and an X-ray burst. However, this will likely only be possible for nearby FRBs. Fortunately, CHIME/FRB is discovering these in good numbers.

“A bright millisecond-duration radio burst from a Galactic magnetar,” by the CHIME/FRB Collaboration, was published in Nature.

The CHIME/FRB Project is funded by a grant from the Canada Foundation for Innovation (CFI), the Provinces of British Columbia and Québec, and the Dunlap Institute for Astronomy and Astro-physics at the University of Toronto. Additional support was provided by the Canadian Institute for Advanced Research (CIFAR), McGill University and the McGill Space Institute via the Trottier Family Foundation, and the University of British Columbia. CHIME is funded by a grant from the CFI Leading Edge Fund and by contributions from the provinces British Columbia, Quebec and Ontario. The Dunlap Institute is funded by an endowment established by the David Dunlap family and the University of Toronto. Research at Perimeter Institute is supported by the Government of Canada through Innovation, Science and Economic Development Canada and by the Province of Ontario through the Ministry of Research & Innovation. The National Radio Astronomy Observatory is a facility of the National Science Foundation operated under cooperative agreement by Associated Universities, Inc.

CHIME/FRB is a collaboration of over 50 scientists led by McGill University, University of British Columbia, the University of Toronto, the Perimeter Institute for Theoretical Physics, and the National Research Council of Canada (NRC). The $16-million investment for CHIME was provided by the Canada Foundation for Innovation and the governments of British Columbia, Ontario and Quebec, with additional funding from the Dunlap Institute for Astronomy and Astrophysics, the Natural Sciences and Engineering Research Council and the Canadian Institute for Advanced Research. The telescope is located in the mountains of British Columbia’s Okanagan Valley at the NRC’s Dominion Radio Astrophysical Observatory near Penticton. CHIME is an official Square Kilometre Array (SKA) pathfinder facility.