Deep-sea study reveals cause of 2011 tsunami 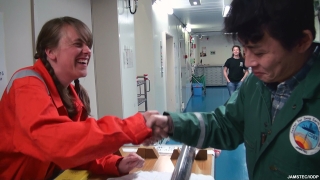 Now, a team of scientists including McGill University geologist Christie Rowe, has published a set of studies in the journal Science that shed light on what caused the dramatic displacement of the seafloor off the northeastern coast of Japan. The findings also suggest that other zones in the northwest Pacific may be at risk of similar huge earthquakes.

Prof. Rowe, of McGill’s Department of Earth & Planetary Sciences, was one of 27 scientists from 10 countries who participated in a 50-day expedition in 2012 on the Japanese drilling vessel Chikyu. The team drilled three holes in the Japan Trench area to study the rupture zone of the 2011 earthquake, a fault in the ocean floor where two of the Earth’s major tectonic plates meet, deep beneath the surface of the Pacific Ocean.

Until 2011, the largest displacement of plates ever recorded along a fault occurred in 1960 off the coast of Chile, where a powerful earthquake displaced the seafloor plates by an average of 20 metres. In the Tohoku earthquake, the slip amounted to 30 to 50 metres – and the slip actually grew bigger as the subterranean rupture approached the seafloor. This runaway rupture thrust up the seafloor, touching off the horrifying tsunami.

The results of last year’s drilling by the Chikyu expedition, outlined in the Science papers published Dec. 6, reveal several factors that help account for this unexpectedly violent slip between the two tectonic plates.

For one thing, the fault, itself, is very thin – less than five metres thick in the area sampled. “To our knowledge, it’s the thinnest plate boundary on Earth,” Rowe says. By contrast, California’s San Andreas fault is several kilometers thick in places.

The scientists also discovered that the clay deposits that fill the narrow fault are made of extremely fine sediment. “It’s the slipperiest clay you can imagine,” says Rowe. “If you rub it between your fingers, it feels like a lubricant.”

The discovery of this unusual clay in the Tohoku slip zone suggests that other subduction zones in the northwest Pacific where this type of clay is present – from Russia’s Kamchatka peninsula to the Aleutian Islands – may be capable of generating similar, huge earthquakes, Rowe adds.

To conduct the studies, the scientists used specially designed deep-water drilling equipment that enabled them to drill more than 800 metres beneath the sea floor, in an area where the water is around 6,900 metres deep. No hole had ever before been drilled that deep in an area of similar water depth. At those extraordinary depths, it took six hours from the time the drill pulled core samples from the fault until it reached the ship.

During night shifts on deck, Rowe was in charge of deciding which sections of drill core would go to geochemists for water sampling, and which would go to geologists for studies of the sediment and deformation structures.  “We X-rayed the core as soon as it came on board, so the geochemists could get their water sample before oxygen was able to penetrate inside the pores of the sediment.”

The expedition was supported by member countries of the Integrated Ocean Drilling Program (particularly Japan and the US), and Canadian participants were supported by the European Consortium for Ocean Research Drilling, of which Canada is a member.

Links to the Science papers:

IMAGE: Scientists Christie Rowe (left) of McGill University and Kohtaro Ujiie of Tsukuba University, aboard the Chikyu, celebrated with a handshake when they agreed they had found the ocean-floor fault in the drill core.  CREDIT: JAMSTEC/IODP