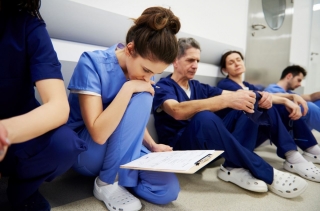 While the COVID-19 pandemic has already resulted in mass layoffs in several industries, other essential industries will instead face critical workforce shortages, according to a new report. Social distancing, school and daycare closures, and measures to protect those people who are most at-risk limit the pool of workers firms can draw upon. How important will these constraints turn out to be, especially in essential industries?

To find out, researchers from McGill University, University of Rochester, and Stony Brook University provide a snapshot of the situation in the United States drawing on data from the Survey of Income and Program Participation, the American Community Survey, and the National Health and Interview Survey.

“To minimize the spread of the pandemic, state governments are increasingly restricting who can work outside the home to workers in essential industries. Roughly 60% of employment is in these industries,” says Fabian Lange, a professor of economics at McGill University and Canada Research Chair in Labour and Personnel Economics. “Reducing the strain on the health care workforce will be essential as they stand on the front lines of the battle against the pandemic.”

According to the researchers, an important factor limiting the labour supply of people who can work outside the home is childcare. School and daycare closures have made it substantially more difficult for some employees to go to work. Because of social distancing, grandparents, friends, and neighbors are less able to pick up any of the slack.

Roughly a quarter of the U.S. workforce has young children at home and may therefore be constrained from full-time work. Rates are slightly higher in essential industries and highest in health care, where 5.6 million workers have at least one child under 12. Health care workers are also more likely to be single parents, and especially single mothers. It is therefore imperative to implement policies addressing childcare for health care workers to maintain labour supply in this crucial sector.

At-risk populations in the workforce

“Another limiting factor on labour supply could be attempts to limit outside contact for members of the household who are most at-risk. At-risk populations include those aged 65 and over, people with compromised immune systems, and people with underlying medical conditions,” says Lange.

About one-fifth of the workforce is in an at-risk group or lives with someone who is more likely to suffer severe consequences from COVID-19. In health care, 25% of workers fall into this category. Overall, 18.5 million essential (non-health) workers and 4.6 million health care workers are in a high-risk group that limits their ability to participate in the labour force in order to protect themselves or a family member with underlying conditions.

According to Lange, health care workers are subject to additional constraints. “They are under tremendous stress – not only because they face an increase in patients requiring intensive care, but also because of the likelihood that they themselves become infected.”

The researchers note that one response has been to encourage former nurses and health care workers to return from retirement and other jobs. However, the reserve pool of potential health care workers is relatively small after accounting for the risks they face. The researchers estimate that if every one-time nurse not currently in nursing was recalled, this would increase the number of nurses by 27%. More broadly in health care, the potential pool could add up to 40% more workers. Nevertheless, two-thirds of these are either in a high-risk group or live in a household with a member from a high-risk group.

“Labour Supply in the time of COVID19” is authored by Lisa Kahn (University of Rochester), Fabian Lange (McGill University), and David Wiczer (State University of New York at Stony Brook).