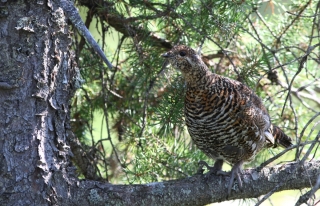 A team of researchers believe that Quebec’s protected areas are poised to become biodiversity refuges of continental importance. They used ecological niche modeling to calculate potential changes in the presence of 529 species in about 1/3 of the protected areas in southern Quebec almost all of which were under 50 km2 in size. Their results suggest that fifty - eighty years from now (between 2071–2100) close to half of the protected regions of southern Quebec may see a species turnover of greater than 80 %. The research team, from l’Université du Québec à Rimouski, le Ministère des Forêts, de la Faune et des Parcs, and McGill University believe that, depending on the region, the gain in the number of species of birds, amphibians, trees, and vascular flowering plants could range from 12 and 530 %. It is the first study to examine in such details the potential effects of climate change on the biodiversity of a large network of northern protected areas.

A need to rethink conservation paradigms?

The researchers caution, however, that potential species gains should not draw attention away from the potential extinction of local species that may no longer find suitable conditions in future in the protected areas where they are at the moment. The geographical pattern of potential relative species loss suggests that several species could disappear in both the southernmost protected areas of Quebec, and in the higher latitudes, where the extinction of only a few local species can have drastic effects on whole ecological communities.

For gallery of downloadable images: https://www.mcgill.ca/newsroom/node/39579/

The research was funded by the Ministry of Sustainable Development, Environment, and the Fight against Climate Change of Quebec (MDDELCC), Ducks Unlimited Canada, Government of Canada, Ministry of Forests, Wildlife and Parks of Quebec, Ouranos Consortium on Regional Climatology and Adaptation to Climate Change, and Natural Sciences and Engineering Research Council of Canada (NSERC).