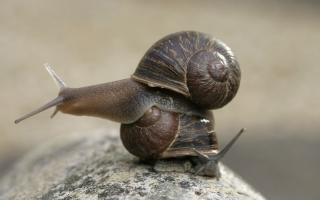 Researchers at McGill University have discovered a mechanism by which helical biomineral structures can be synthesized to spiral clockwise or counterclockwise using only either the left-handed or right-handed version of a single acidic amino acid.

Marc McKee, a professor in McGill’s Faculty of Dentistry and the Department of Anatomy and Cell Biology, and his team, along with collaborators from Johns Hopkins University, shed light on how certain biological structures - like terrestrial and marine snail shells - can have both clockwise and counterclockwise spirals, not only within the same species, but also within the shell of an individual organism.

In an article published online in Science Advances, Professor McKee and his team constructed chiral (see “What is chirality?” description box below) helicoidal structures of the biomineral calcium carbonate (a mineral typically found in shells) by the simple addition of specific amino acids.

Remarkably, they could also make the helicoids turn clockwise or counterclockwise by simply using only either the left-handed or right-handed version of the amino acids aspartic acid and glutamic acid – these being abundant in proteins that guide biomineralization processes in many organisms.

"This work provides key information towards understanding how organisms can have biomineralized structures rotating in opposite directions,” says McKee, senior author of the study. “Our findings also give insight into pathologic chiral malformations that might arise in human otoconia, structures in the inner ear whose normal functioning maintains balance by gravity sensing and by detecting linear acceleration. Our work predicts how pathologic chiral malformations might arise in human otoconia and could one day be used to develop therapies for vertigo (loss of balance) based on this understanding”.

Image 1 caption : Jeremy the snail (top) has a counter-clockwise rotating shell, contrary to that of most of his fellow snails (bottom). Credit : Dr Angus Davison, University of Nottingham

Image 2 caption : Much like our hands are non-superimposable images of themselves, many molecules are also chiral. Amino acids, the building blocks of protein, have chiral forms, that is, where one form is left-handed and the other form is right-handed and will never be the same, whichever way you turn them. Credit : [Public domain], via Wikimedia Commons