Where are all your friends during a cyberbullying episode? 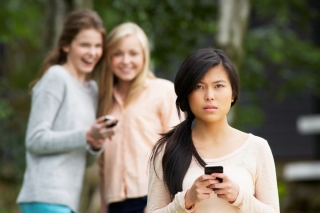 Your child is in elementary school and is begging you to buy them a cell phone, an iPod and iPad.  Anything, as long as they can communicate with their friends, either by texting or through social media.  As a parent, you’re worried about cyberbullying.  Indeed, up to 30% of children and adolescents admit to cyberbullying others, while 25% of students report being victimized on electronic platforms.  You rationalize that your child has lots of friends and that they will stand up for them in a bullying situation.  Do they?  What is the role of the bystander/friend during a bullying incident?

In a study published recently in the journal Computers in Human Behaviour, researchers from McGill University’s Department of Educational & Counselling Psychology interviewed elementary and high-school aged students to learn more about their thoughts on the role of bystanders in cyberbullying.  A total of 100 children and adolescents, aged 8-16 years old participated in the study.  The children read four stories that depicted cyberbullying.  In all the stories, the bystander was neutral and did not interfere with the bullying.  For two of the stories children were asked to justify a bully's behaviour and for the other two stories, they were asked to justify the bystander's behaviour.

This led the authors to determine that the children in the study were not likely to intervene if they were a bystander in a cyberbullying event.  “As children get older they tend to blame circumstances surrounding the event, rather than the bystander in the story,” explains Karissa Leduc first author on the paper.  “They make excuses to justify the bystander’s neutral position.”

By understanding more about how children and adolescents view or rationalize the behaviours of online aggressors and bystanders, researchers can find new ways of teaching children about cyberbullying.  “This study pointed out the importance of talking about cyberbullying and the role of the bystander at a young age, as children become less likely to defend a victim or report an act of on-line aggression as they get older,” says Victoria Talwar, the senior author on the paper.  “These discussions could help younger children think critically about their own and others’ involvement in cyberbullying, and the ways they could help victims.”

The article “The influence of participant role, gender and age in elementary and high-school children’s moral justifications of cyberbullying behaviours” was published June 2018 in Computers in Human Behaviour.