A breakthrough for organic reactions in water 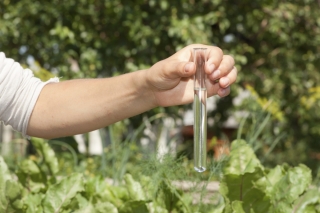 Green-chemistry researchers at McGill University have discovered a way to use water as a solvent in one of the reactions most widely used to synthesize chemical products and pharmaceuticals.

The findings, published June 26 in Nature Communications, mark a potential milestone in efforts to develop organic reactions in water.

Chao-Jun Li and Feng Zhou of McGill’s Department of Chemistry report that they have discovered a catalytic system which for the first time allows direct metal-mediated reactions between aryl halides and carbonyl compounds in water.

For the past two decades, researchers have been exploring ways to do away with chemists’ traditional reliance on non-renewable petrochemical feedstocks and toxic solvents. One important method has involved replacing the toxic solvents used in metal-mediated reactions with water – something that was previously considered impossible.

While researchers at McGill and elsewhere have succeeded in using water in metal-mediated reactions between carbonyl compounds and other halides, attempts to do so for the most challenging reaction, between aryl halides and carbonyl compounds, have never worked – until now.

Prof. Li and Dr. Zhou, a postdoctoral fellow, found that rhodium -- a metal primarily used in the catalytic converters of automobiles -- as a catalyst together with zinc as a mediator can make the reaction possible in water. This new technique bypasses a number of challenges posed by conventional practices in carrying out this reaction, which is widely used in synthesizing fine chemicals, biologically active molecules and pharmaceuticals. Traditional methods, discovered more than a century ago, require that moisture and air be carefully excluded from the process.

The research was supported by the Canada Research Chairs program, the Fonds de recherche du Québec – Nature et technologies, the Natural Sciences and Engineering Research Council of Canada, and the Canada Foundation for Innovation.