Bacterium from Canadian High Arctic and life on Mars 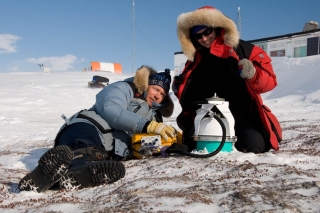 The team of researchers, led by Prof. Lyle Whyte and postdoctoral fellow Nadia Mykytczuk, both from the Dept. of Natural Resource Sciences at McGill University, discovered Planococcus halocryophilus OR1 after screening about 200 separate High Arctic microbes looking for the microorganism best adapted to the harsh conditions of the Arctic permafrost. ”We believe that this bacterium lives in very thin veins of very salty water found within the frozen permafrost on Ellesmere Island,” explains Whyte. “The salt in the permafrost brine veins keeps the water from freezing at the ambient permafrost temperature (~-16ºC), creating a habitable but very harsh environment. It’s not the easiest place to survive but this organism is capable of remaining active (i.e. breathing) to at least -25ºC in permafrost.”

In order to understand what it takes to be able to do so, Mykytczuk, Whyte and their colleagues studied the genomic sequence and other molecular traits of P. halocryophilus OR1. The researchers found that the bacterium adapts to the extremely cold, salty conditions in which it is found thanks to significant modifications in its cell structure and function and increased amounts of cold-adapted proteins. These include changes to the membranes that envelop the bacterium and protect it from the hostile environment in which it lives.

The genome sequence also revealed that this permafrost microbe is unusual in other ways. It appears to maintain high levels of compounds inside the bacterial cell that act as a sort of molecular antifreeze, keeping the microbe from freezing solid, while at the same time protecting the cell from the very salty exterior environment.

The researchers believe however, that such microbes may potentially play a harmful role in extremely cold environments such as the High Arctic by increasing carbon dioxide emissions from the melting permafrost, one of the results of global warming.

Whyte is delighted with the discovery and says with a laugh, “I’m kind of proud of this bug. It comes from the Canadian High Arctic and is our cold temperature champion, but what we can learn from this microbe may tell us a lot about how similar microbial life may exist elsewhere in the solar system.”