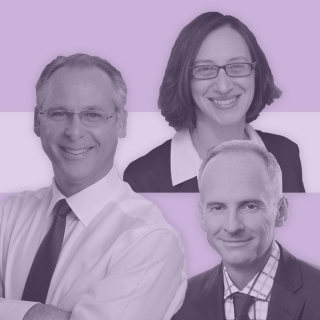 The pandemic has had a major impact on the Canadian, US, and global economy. Economic recovery from the COVID-19 pandemic will be complex and challenging. To better understand what’s in store for global economic recovery over the coming months, join McGill Alumni for a conversation with Professor Chris Ragan, banking executive Sylvain Leduc, and economic expert Danielle Goldfarb. They will answer your most pressing questions about the impact of COVID-19 on the world’s economies, the state of current government measures and responses, and the pathways and roadblocks to economic recovery.

Director of the Max Bell School of Public Policy

Christopher Ragan is a Canadian academic and economist. He is best known for his research on monetary policy, and for his popular introductory textbook, Economics, now in its fourteenth edition and co-authored by Richard Lipsey. He is chair of Canada's Ecofiscal Commission, a group of Canadian economists seeking to broaden the discussion of environmental pricing reform beyond the academic sphere and into the realm of practical policy application. He is an Associate Professor at McGill University, where he has been on the faculty since 1989. Throughout his tenure, he has taught a wide range of economics courses, both at the undergraduate and graduate levels. In 2007, he became the first in the Faculty of Economics to receive the H. Noel Fieldhouse teaching award for excellence in teaching. His research and academic writing is largely focused on Canadian public policy challenges, and since 2007, the policy responses to the financial crisis of 2007-2009.

Danielle Goldfarb is head of global research at RIWI (https://riwi.com/). Danielle’s research expertise is in the global gig economy, real-time labour market trends, global trade, and the global digital economy. Before joining RIWI, Danielle held senior roles at several economic policy think tanks. She directed the Conference Board of Canada’s research centre on global commerce, and led trade and trade policy research at the C.D. Howe Institute. Maclean’s magazine has called Danielle one of Canada’s top trade experts. Danielle’s October 2019 Tedx talk is on the critical ingredient for predicting the future. Danielle has an M.Phil. in International Relations from Cambridge University and a B.Comm. in Honours Economics from McGill University.

From May 2016 until July 2018, Dr. Leduc served as Deputy Governor of the Bank of Canada. As a member of the Bank’s Governing Council, he shared responsibility for decisions on monetary policy and financial system stability and for setting the Bank’s strategic direction. Born in Montréal, Canada, Dr. Leduc received his bachelor’s and master’s degrees in economics from McGill University and obtained a PhD in economics from the University of Rochester. He has served as Editorial Advisor for the Canadian Journal of Economics.