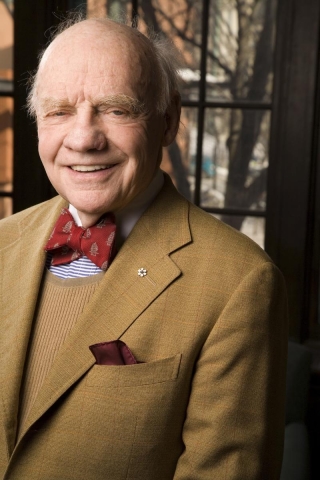 It is with sadness that the Faculty announces the death of Professor William Tetley, C.M., Q.C., LL.L., who passed away, surrounded by his family, on July 1, 2014.

He graduated from the Royal Canadian Naval College in 1945 and served at sea and in the Reserve from 1945-1951. He then practised civil, commercial and maritime law from 1952 to 1970 – during which time he also acted as a book reviewer at the Montreal Gazette – before turning his attention to municipal and provincial politics: he served as City Councillor in the Town of Mount Royal from 1965-1968, the member for N.D.G. in the Quebec National Assembly from 1968 to 1976 and a cabinet minister in the first Bourassa cabinet from 1970 to 1976.

Professor Tetley joined the Faculty in 1976 and built an illustrious academic career in which he authored over 150 articles and seven monographs and was appointed Distinguished Visiting Professor of Maritime and Commercial Law at Tulane University, New Orleans. In 2007, he was presented with the Faculty’s F.R. Scott Award for Distinguished Service in recognition of his contributions to his field.

Always committed to public service, Professor Tetley also served as chairman, president and member of the executive council of many maritime councils and law associations, including a task force on the maritime industry of Montreal appointed in 1992 (Table de Concertation sur l’Industrie Maritime de Montréal) as well as the Comité Maritime International. He was named to the Order of Canada in 1995.

His website, Tetley’s Maritime and Admiralty Law (no longer active), housed anecdotes from various points of his career, as well as a wealth of information about maritime law. It was a testament to his vast range of expertise, his engagement with his audience, and his gentle but spirited sense of humour.

The Faculty of Law offers its most heartfelt condolences to his wife, Rosslyn Tetley, his four children and nine grandchildren, and to the entire family.