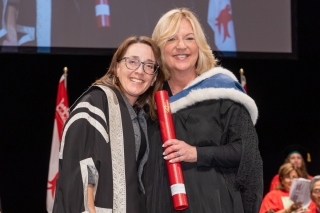 The Faculty of Law is pleased to announce that Professor Rosalie Jukier is co-recipient of McGill University’s Morty Yalovsky Lifetime Achievement Award for Excellence in Academic Leadership. She and Dr. Samuel Benaroya of the Faculty of Medicine and Health Sciences were honoured at the University’s Fall Convocation ceremonies on 26 October.

Created in 2021, the award recognizes sustained excellence over an academic career in leadership and contribution to the McGill Community. Named after Professor Morty Yalovsky, who devoted more than five decades of service to McGill as an exemplary pedagogue, researcher, and academic leader, this award honours the lifetime achievements and dedication to McGill University of academic staff, whose service to our university community has been both exemplary and inspiring.

“When presented with the nomination of Professor Rosalie Jukier, the selection committee met a dossier charged with energy, vision, and administrative acumen,” said Christopher Buddle, Associate Provost (Teaching and Academic Programs), during the presentation ceremony.

Rosalie Jukier (BCL’83, LLB’83) is a full professor at the Faculty of Law, which she joined in 1985. She teaches in the traditions of the civil law and common law, primarily in the areas of Contractual Obligations and Judicial Institutions and Civil Procedure. Deemed “an outstanding leader and institution-builder at McGill” by the Review Selection Committee, professor Jukier served four times as associate dean of the Faculty of Law (admissions, 1991–5; strategic planning, 2004–5; graduate studies, 2010–13; and academic (responsible for the BCL/JD program), 2019–22). Moreover, she served as McGill’s dean of students from 1995 to 2001, spearheading the construction of the Brown Student Services Building and overseeing the creation of First Peoples’ House and the First-Year Office. She is a three-time recipient of the John W. Durnford Teaching Excellence Award, conferred by the Law Students’ Association, and winner of the Principal’s Prize for Excellence in Teaching.

“I was delighted by this recognition of Professor Jukier’s longstanding and unwavering commitment to the flourishing of the Faculty of Law’s and McGill’s students, professors, and staff,” said Dean Robert Leckey.