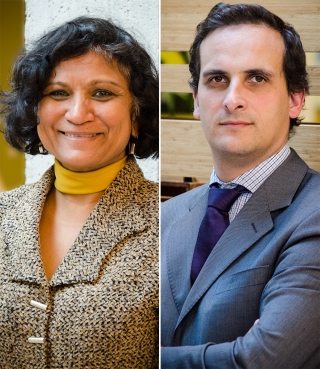 The Faculty of Law is delighted to announce that Professor Frédéric Mégret and Professor Nandini Ramanujam will begin a term as co-directors of the Faculty’s Centre for Human Rights and Legal Pluralism (CHRLP) on 1 February 2021. Their term will last until 30 June 2024.

Prof. Ramanujam focuses her research and teaching on law and development, institutions and governance, economic justice, and food security and safety. She also studies the role of civil society and the Fourth Estate (Media) in the promotion of the rule of law, as well as the interconnections between field-based human rights work and theoretical discourses.

Before joining McGill, Prof. Ramanujam was involved in the successful systemic reform of higher education in the former communist countries of Eastern Europe and the Soviet Union, including the Aga Khan’s Central Asian University and Smolny College in St. Petersburg.

Prof. Mégret is a William Dawson Scholar and held the Canada Research Chair on the Law of Human Rights and Legal Pluralism from 2006 to 2015.

Before joining McGill, Prof. Mégret was an assistant professor at the Faculty of Law of the University of Toronto, a Boulton fellow at McGill University, and a research associate at the European University Institute in Florence.

“Both colleagues have tremendous contributions to make to the CHRLP and I was delighted when they proposed co-directorship as a means of allowing us to benefit from their complementary talents,” said Dean Robert Leckey. “The vibrant activities of the CHRLP, which send our students around the world and bring many scholars and practitioners of human rights to McGill, are a source of great pride to us.”