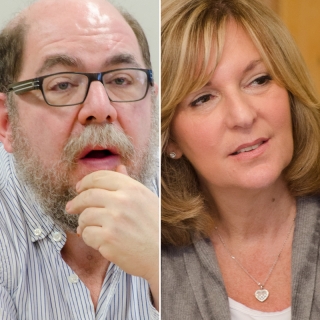 The Faculty of Law is pleased to announce that Professor Daniel Weinstock has been appointed associate dean (Research) for a three-year term starting 1 September 2021. He will replace Professor Allison Christians, H. Heward Stikeman Chair in the Law of Taxation, who is completing a four-year term.

Professor Rosalie Jukier, who has served as associate dean (academic) since September 2019, will continue in her role for an additional year

Professor Weinstock is a past fellow of the Pierre Elliott Trudeau Foundation (2004) and a recipient of the André-Laurendeau Prize given by the Association canadienne-française pour l’avancement des sciences (2008). A James McGill Professor from 2014 to 2020, he was awarded the 2017 Charles Taylor Prize for Excellence in Policy Research by the Broadbent Institute.

Professor Jukier joined McGill’s Faculty of Law in 1985. Her teaching and research interests focus primarily in the areas of contractual obligations, as well as judicial institutions and civil procedure. She is a three-time recipient of the John W. Durnford Award for Teaching Excellence (2004, 2016, and 2018) and was awarded the Principal’s Prize for Excellence in Teaching in 2010. Professor Jukier served as dean of students from 1995 to 2001 and has served the Faculty of Law as associate dean (admissions) from 1991 to 1995, associate dean (strategic planning) from 2004 to 2005, and associate dean (graduate studies) from 2010 to 2013.

“Professor Weinstock will draw on his successes in scholarly publishing, securing external funding, and disseminating his research broadly in encouraging our colleagues to reach still higher in their research endeavours,” said Dean Robert Leckey. “For her part, Professor Jukier has made extraordinary contributions in her role, especially working with instructors and staff in the Student Affairs Office during the pandemic to provide our students with a stimulating legal education to the highest standard. I extend my gratitude to Professor Christians for her championing of our colleagues’ research.”