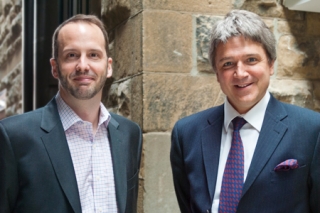 The Faculty of Law is pleased to announce that Professors Frédéric Bachand and Fabien Gélinas have been appointed Norton Rose Faculty Scholars in Arbitration and Commercial Law, for a two year term.

As holders of these Faculty Scholarships, Gélinas and Bachand, who are both active members of McGill's Private Justice and the Rule of Law research team, will be able to support a rich program of activities in international arbitration and commercial law.

“McGill has been growing from strength to strength as an international hub for the development and exchange of ideas in both arbitration and commercial law,” said Gélinas. “This gift to the Faculty at once recognizes this fact and increases our capacity to pursue independent and innovative research. I feel privileged to be part of this.”

“Fabien and I will continue to work together,” added Bachand, “to stimulate and bring together the vital forces of our Faculty, not just those of our colleagues, but also of our students to take them to an unparalleled level.”

The Norton Rose Faculty Scholarships were made possible thanks to a major gift from Norton Rose Canada (formerly Ogilvy Renault) to which nearly 85 % of McGill graduates at the firm contributed.

Dean Daniel Jutras concluded:  “I am convinced that, over the next few years, McGill will continue to be the undisputed locus of critical, pragmatic and informed thinking on issues surrounding arbitration, to be a normative space that mirrors the pluralist legal vision that drives us all. Congratulations to Fabien and Fred.”

Associate Professor Frédéric Bachand teaches in the areas of legal interpretation, extrajudicial dispute resolution, and international investments. Professor Bachand came to McGill after having practiced law for several years with a Montreal firm. His scholarship focuses on domestic and international arbitration, with a particular emphasis on the role national courts play in the arbitral process. A member of the Quebec Bar, Bachand recently served as sole arbitrator in an International Chamber of Commerce arbitration decision and he also frequently acts as a consultant.