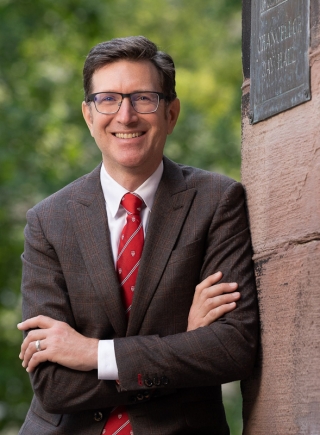 This honorary title is awarded to members of the Quebec Bar who have distinguished themselves through a remarkable career, outstanding contributions to the profession, or constructive community work. Dean Leckey joins Faculty members Adelle Blackett, François Crépeau, Fabien Gélinas, Pierre-Gabriel Jobin, Lara Khoury, and René Provost, as well as Wainwright Librarian Daniel Boyer, in holding this distinction.

Dean Leckey joined the Faculty in 2006, where he teaches and researches in constitutional law, family law, and comparative law. From 2014 to 2016, he served as director of the Paul-André Crépeau Centre for Private and Comparative Law. On 1 July 2016, he began a five-year term as dean of the Faculty of Law. In December 2020, McGill’s Board of Governors reappointed him for a second five-year term.

“The Barreau’s distinction underscores Dean Leckey’s contributions to the legal profession in Montreal and across Quebec,” said Professor Daniel Weinstock, Associate Dean (Research) and Katharine A. Pearson Chair in Civil Society and Public Policy. “His long record of service, significant scholarly output, and work to uphold justice through his research and teaching are all recognized through this newly awarded title.”